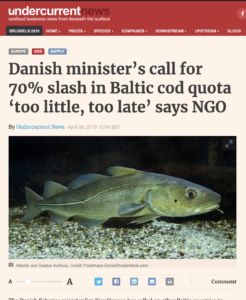 The Danish fisheries minister Eva Kjer Hansen has called on other Baltic countries to substantially cut the fishing quotas for Baltic cod this year, ahead of a total stop in 2020.

Scientists from the International Council for the Exploration of the Seas (ICES) have found that levels of Baltic cod are now so low that even a total ban on cod fishing in 2020 would not be enough for cod levels to reach even the lowest bottom limit of the stock in 2021.

“We cannot solve the problem in Denmark alone,” said Hansen. “Therefore, I would suggest to my colleagues from the other Baltic countries that the total cod quota in the eastern Baltic Sea be reduced by 70% this year already. This will mean a stop for targeted cod fishing, but still allow for bycatch of cod in other fisheries.”

However, Hansen’s proposal has been criticized by the environmental campaign Our Fish, who described the decision to cut the 2019 quota by 70% as “far too little, far too late”.

Cathrine Pedersen Schirmer, coordinator of the Danish Our Fish campaign, said: “The minister’s proposal to reduce the quota by 70% is less impressive than she would have us believe — an enormous 7,233t of cod will still be fished, under the questionable auspices of ‘unavoidable bycatch’. This will not save eastern Baltic cod, and only serves to perpetuate overfishing by an industry that is renowned for failing to transition to a sustainable model.”