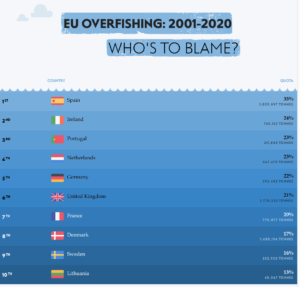 EU countries have overfished 8.78 million tonnes during the last 20 years

Brussels, 29 April 2020:- The New Economics Foundation and Our Fish campaign today called on the EU and its Member States to include ending overfishing in their climate laws, after a new study found that EU countries have overfished by 8.78 million tonnes during the last 20 years [1]. According to the historical analysis released by the New Economics Foundation (NEF), Spain, Ireland, Portugal, Netherlands and Germany top the “overfishing League” table, by gaining the highest percentage of quotas above scientifically advised levels for sustainable limits over a 20-year period (35%, 24%, 23%, 23% 22% respectively), while the UK, Denmark and Spain have received the most in terms of excess tonnage (1.78M tonnes, 1.48M tonnes and 1.04M tonnes respectively).

“If the EU delivered on its commitment to end overfishing and rebuild damaged fish stocks to sustainable levels, it could create over 20,000 new jobs, provide food for 89 million people, and generate an extra €1.6 billion in annual revenue”, said Griffin Carpenter, Senior Researcher at the New Economics Foundation. “Instead, every year, fisheries ministers have set fishing limits above the best available scientific advice, even going so far as to ignore the EU’s own legal deadline of 2020. To deliver sustainable seas, EU fisheries ministers must end this practice, and respect EU law, by following the scientific advice. ”

The latest analysis, part of the Landing the Blame report by the New Economics Foundation on the agreed annual fishing limits (total allowable catch or TAC) for commercial fish stocks in EU waters, discovered that between 2001 and 2020, on average, six out of ten TACs were set above scientific advice. While the percentage by which TACs were set above advice declined throughout this period (from 39% to 10% in all EU waters), the proportion of TACs set above advice has had a lesser decline, from eight out of ten TACs to five out of ten.

“As the COVID crisis has clearly demonstrated, our systematic destruction of nature is drastically threatening the health of our planet, and the health of people. NEF’s Landing the Blame analysis brings home the stark truth that by overfishing almost nine million tonnes of fish in 20 years, EU fisheries ministers continue to radically undermine the one ecosystem that provides us with the best protection against climate change – the ocean,” said Rebecca Hubbard, Programme Director at Our Fish. “The European Commission and EU leaders must wake up to the seriousness of this situation – the potential for the ocean to shift from friend to foe if we do not ease pressure on it – by enshrining the ending of overfishing and restoration of ocean health in the EU Green Deal, and by prioritising finalising the Biodiversity and Farm to Fork Strategies as a matter of urgency.”

“Due to the continued overfishing of cod and herring in the Baltic Sea, Germany has been the European champion in overfishing the Baltic Sea since 2018”, said Sascha Müller-Kraenner, Executive Director of Environmental Action Germany (Deutsche Umwelthilfe – DUH). “Germany has failed to end overfishing and fishermen and ecosystems are now suffering from the consequences. During the German EU Council Presidency, Julia Klöckner must absolutely ensure that the Common Fisheries Policy is adhered to and that fishing quotas are no longer set above scientific advice.”

“This is shocking evidence of the sustained and sought after overexploitation of an incredibly valuable natural resource. This is not protecting coastal communities, it is engineered biodiversity loss, putting livelihoods and planetary health at risk. As Irish political parties negotiate a new government, this report should serve as evidence of the causes of the biodiversity and climate emergency, and exemplify how responsible fisheries management could restore the marine environment and the communities who rely on it”, said Mike Walker, advisor to Our Fish.

“Portugal must leave behind its past as a big, long-distance fishing nation, and focus on the sustainability of the fisheries and marine resources close to its own shores”, said Goncalo Carvalho, Executive Coordinator of Sciaena. “Fishing in line with – or even below – the scientific advice is not only the safest way to ensure a sustainable fishing sector, but also one of the best and most direct ways to increase the resilience of its marine ecosystems and contribute to countering climate change.”

Based on these discoveries, Lydia Chaparro, marine ecologist at the ENT Foundation, states that “due to the current challenges faced by industry, it’s more important than ever to preserve the viability of their business by securing sustainable fisheries. For this reason, we ask the EU – and the Spanish Government – to significantly increase their efforts to end overfishing. In practice, this implies that, by 2021, all fishing opportunities, including those for deep-sea species, must be established according to the sustainable levels scientifically advised. ” Chaparro adds that “given the delicate situation generated by the COVID-19 pandemic, the Government must establish measures to favour the part of the fleet that provides the greatest social benefit and generates the least environmental impact, thus favouring the transition to a sustainable and low impact fishing sector”.

[1] Landing the Blame: Overfishing in the Northeast Atlantic 2020:

The NEF analysis ranks EU Member States on the proportion of their quota that was set above scientific advice, rather than overall tonnage, on the basis that for two decades, EU member states have apparently asked for – and subsequently received – quotas, and thus access, above the scientific advice provided by ICES (International Council for the Exploration of the Sea).

The reformed Common Fisheries Policy (CFP), which entered into force in 2014, aims to restore and maintain populations of fish stocks above levels capable of supporting Maximum Sustainable Yield (MSY) (https://ec.europa.eu/fisheries/cfp_en). The corresponding exploitation rate was to be achieved by 2015 where possible and by 2020 at the latest for all stocks.

Our Fish is working to end overfishing and restore a healthy ocean ecosystem. By collaborating with others, and deploying robust evidence, we are calling for an end to overfishing as a critical and significant action to address the biodiversity and climate crisis

Euronews: Report says subsidies up to...