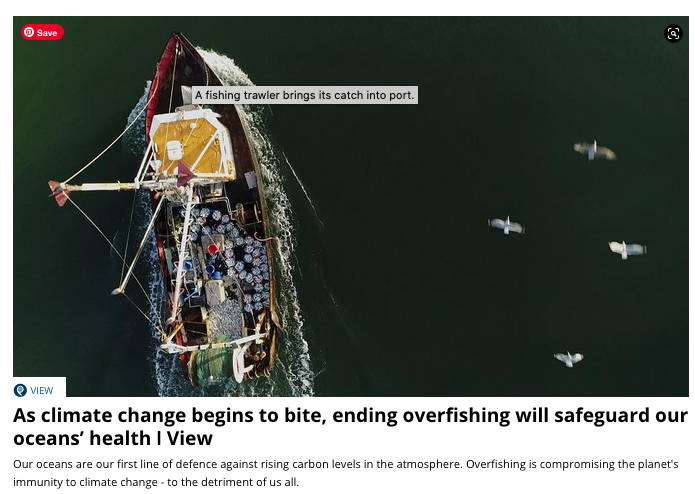 During September, we have had three opportunities to present our work on the interplay between climate change, the ocean and fisheries. These webinars were aimed at helping Members of the European Parliament (MEPs), members of EU Commissioners’ Cabinets, and engaged members of the public and media to better understand the challenges facing the ocean and to spell out the readily available actions that European citizens can take to protect it. We explored how the European Union and its member states can lessen the impacts of climate change on Europe’s seas, by ending the practice of destructive overfishing.

During the same period, commitments made by world leaders on climate action at the UN General Assembly, and the Pledge for Nature at the UN Biodiversity Summit, have highlighted both the global momentum and need for such action to be taken.

These new, increasingly urgent pledges are the culmination of the acknowledgements and ambitions that have been building among the global community for decades, and are most holistically represented by the 17 UN Sustainable Development Goals (SDG) for 2030, which embrace the three pillars of sustainable development: environment, society and economy. In fact, the success of all 17 goals rely, to some extent on the success of one, i.e., SDG14 – Life Below Water, which is the critical component of the founding pillar, the environment. Ocean resources, data, science and services are critical for successful and healthy human life on the planet: it is actually a matter of life or death.

Planet Earth is warming. Or, as our planet is 71% ocean – perhaps we should say Planet Ocean. We are nothing without the ocean – it provides us with roughly every second breadth, a reservoir for biodiversity and all the services it provides humans, and a source of over 90% of freshwater. Yet we are treating our ocean with contempt – as well as overexploiting its natural riches, the ocean is warming due to emissions of heat-trapping gases resulting from human activities; it has taken up 20-30% of the global emissions from human activities over the past three decades inducing ocean acidification, and more than 90% of the excess heat in the climate system, making climate change irreversible. Without the ocean, our air would be an extra 35 degrees warmer.

Despite a multitude of promises from a succession of world leaders, we are clearly struggling to limit the future increases in average planetary temperature to the 2oC agreed (despite the fact that scientists have repeatedly warned that 1.5o should be the target). While enormous efforts must be made to limit emissions, there are ways we can ensure that the ocean can continue to absorb carbon emissions and be stronger in the face of future climate change impacts.

With climate change, the ocean is becoming more acidic, less oxygenated, warmer and sea level is rising; it sounds as bad as it is. This is making life harder at all levels in the ocean – from the individual fish, to marine populations, and ecosystems – which in turn, is making it harder for fisheries.

Humanity has a long history of overexploiting fish – the lifeblood of the ocean on which we depend. This never has a good outcome – no fish means no fisheries, jobs, seafood or incomes for coastal communities. Conversely, well managed fisheries means an ocean that teems with life – this life not only provides us fish, it can also play an important role in climate mitigation and adaptation. A healthy ocean ecosystem ensures that high levels of carbon can be sequestered below the waves – a healthy ocean is crucial to bolstering our planet against the worst impact of climate change.

All of these new pledges show that global leaders still aim to get us out of this planetary crisis we have created. But the European Union, and governments worldwide, must match that ambition with action – they must eliminate carbon emissions, effectively protect at least 30% of marine areas by 2030, and reduce destructive overfishing and publicly-funded subsidies that undermine our other efforts – very quickly we will be rewarded with higher catches for more fishers, a healthier ocean, and a stronger defence against climate change.

Healthy fish are like a healthy person; a healthy person is more likely to survive an epidemic than a person who is unwell. Overfishing has severely weakened the ocean’s immune system, and climate change will only make things worse. If we continue to destroy the health of the ocean with destructive overfishing, it will have severe impacts on life in the ocean and on all our lives. The risks and the opportunity here are clear, just as the science is. It is time for EU governments and the European Commission to start delivering on their commitments – and that means fishing within nature’s limits.