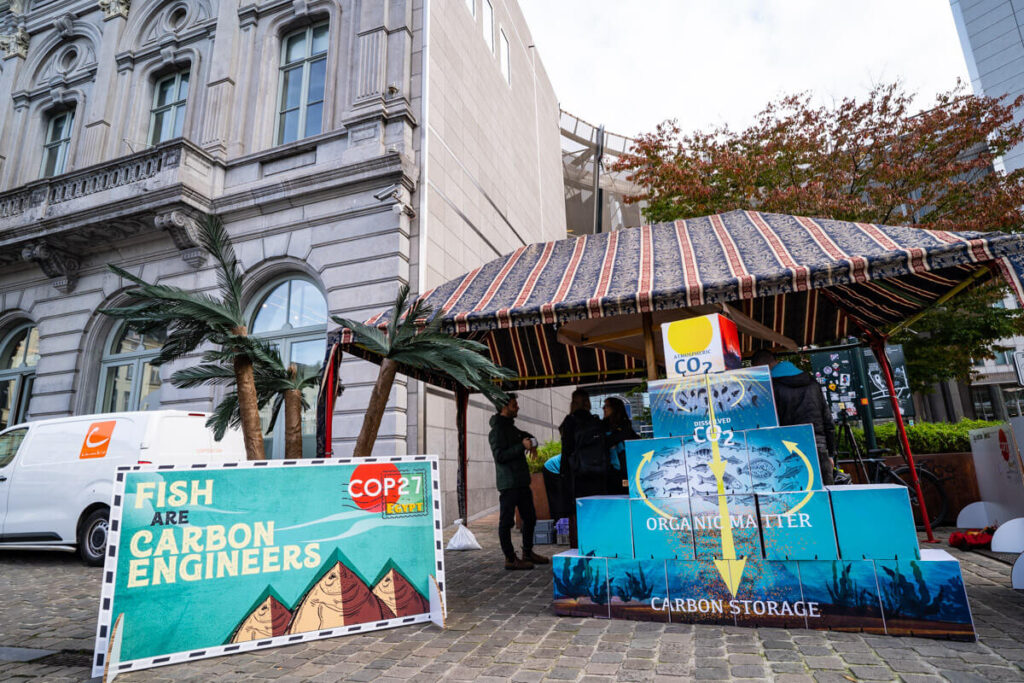 Our fish at European Institutions, 7-8 November 2022, ahead of launch of Fish are Carbon Engineers paper at COP27 in Egypt.

Every fish that swims through the ocean is a carbon engineer. Along with whales and the billions of tiny ocean-dwelling organisms called plankton, fish are keystones of the ocean’s biological pump, the system constantly at work capturing carbon from Earth’s atmosphere and taking it deep beneath the waves.

Every day, the Earth’s largest migration carries carbon – including whale and fish poo – from the sea’s surface to the ocean floor, where its stored in marine sediments – twice as much as is stored in soils on land. Fish and other marine animals are the carbon engineers of this cycle, taking this carbon to the depths, and protecting us from the worst impacts of climate change.

Yet we’re not giving these intrepid engineers the respect they deserve. Every year, an incredible 80 million tonnes of fish are taken from the ocean – removing significant amounts of “blue carbon”. Our demand for fish has halved fish’s biogeochemical impact on the ocean, weakening its capacity for climate mitigation. While the fight is on to end humanity’s harmful fossil fuel emissions, we’re in danger of squandering an important tool for keeping the planet cool.

And that, dear reader, is how we found ourselves outside a November morning, offering Egyptian cakes and coffee to people outside the European Parliament, and how Our Fish surfaced at the COP27 climate summit in Egypt to present a short briefing on the idea – Fish are Carbon Engineers

As another round of battle for the climate kicked off in Egypt, the Our Fish team was in Brussels, setting up fake palm trees, a tent and outsized postcards, for our COP27-themed Fish are Carbon Engineers extravaganza near the European Commission and European Parliament,  puzzled commuters made their way to their offices.

Lured in the tent with baklava and Egyptian spiced coffee, we asked people to help us build pyramid representing the ocean biological pump, and to send a COP27 postcard to European Commissioner for the Environment, Oceans and Fisheries Virginijus Sinkevičius, urging him to deliver effective fisheries management as good carbon management. Many of those who stopped to talk with us told us they hadn’t thought of the link between fish and carbon before.

Thanks to everyone who came to support us – including our friends from many other NGOs campaigning for the oceans, and to Green MEP Grace O’Sullivan from Ireland who stopped by. 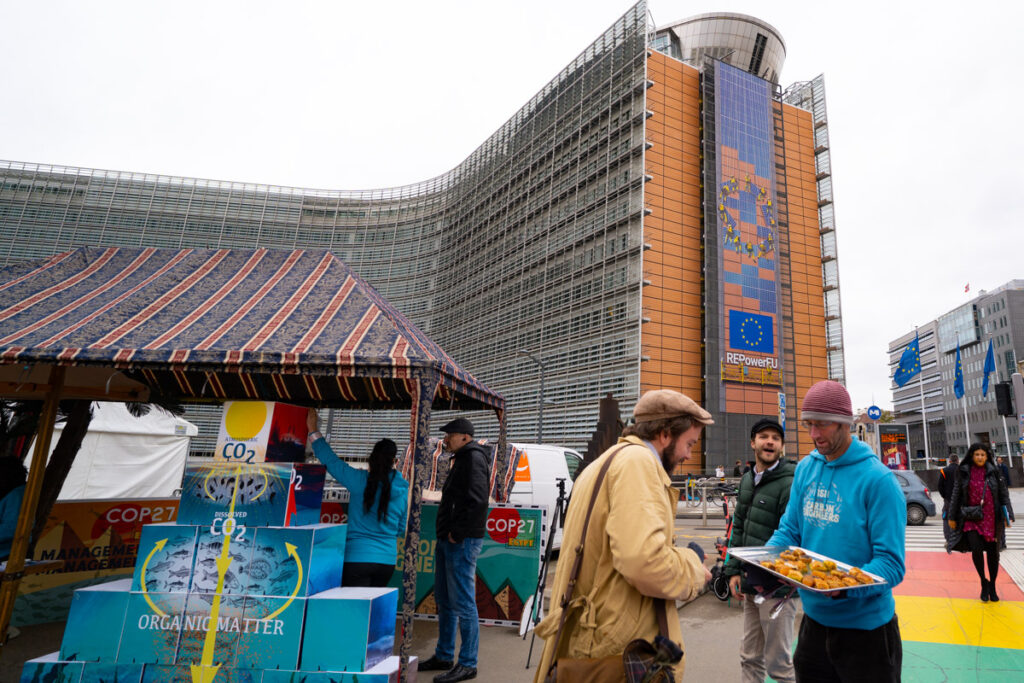 Our fish at European Institutions, 7-8 November 2022, ahead of launch of Fish are Carbon Engineers paper at COP27 in Egypt. 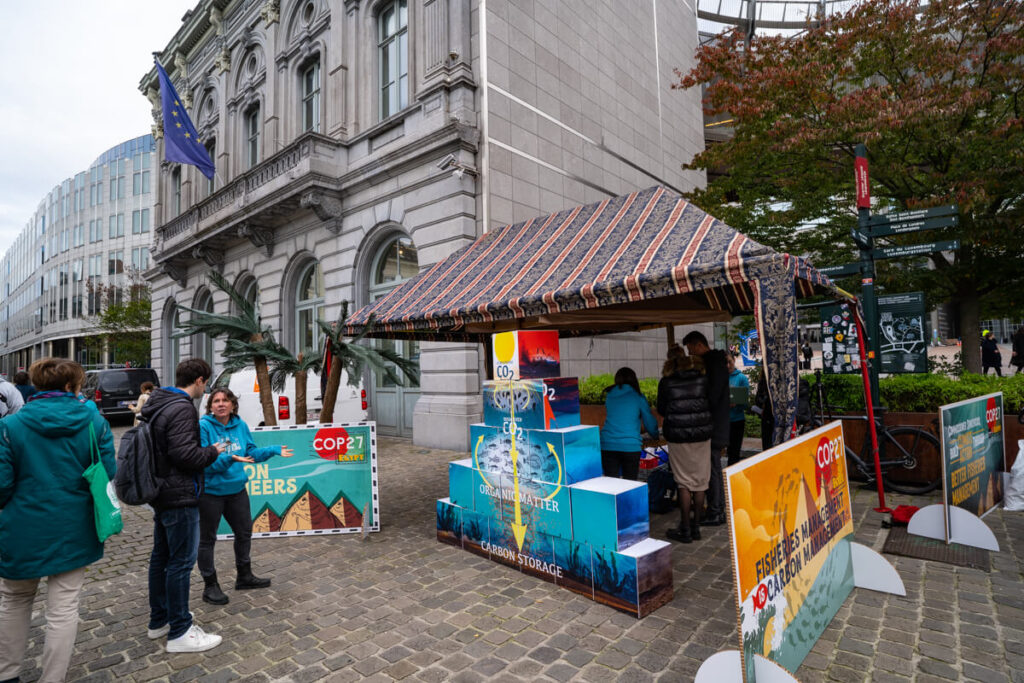 Before we left Brussels, we delivered a giant COP27 postcard, covered in over 2,000 personalised messages from our supporters, to Commissioner Sinkevičius’s office, where it was accepted by his deputy head of cabinet, Carmen Priesing.

The postcard calls on the Commission to deliver the EU’s Ocean Action Plan without further delay – and demands EU leadership and urgent action on minimising the climate and ecosystem impacts of fishing. The Ocean Action Plan was supposed to be delivered in 2021, but has not yet seen the light of day. We’re still waiting. 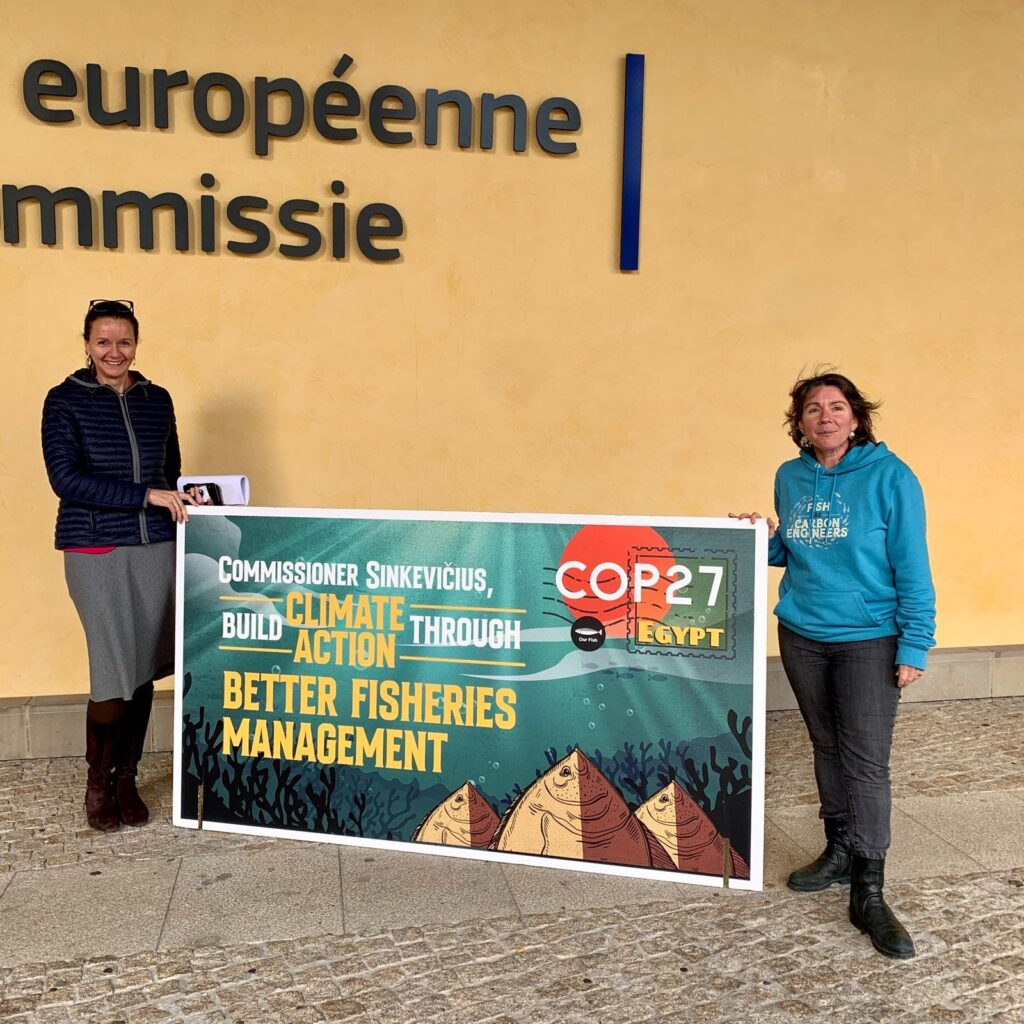 On the final day, we delivered a giant COP27 postcard, covered in over 2,000 personalised messages from our supporters, to Carmen Priesing, Deputy Head of Cabinet to the Commissioner for Environment, Oceans and Fisheries, Carmen Priesing.

Our Fish at the Red Sea

Our shenanigans in Brussels were barely over before Our Fish’s Program Director, Rebecca Hubbard was again spreading the good word: that fish are carbon engineers – this time at COP27 in Sharm El-Sheikh.

In recent years, the ocean has become a stronger force at UN climate summits, leading to countries agreeing on an annual Ocean and Climate Change Dialogue at COP26 in Glasgow. That is a major recognition of the crucial role of the ocean, which covers a full 70% of the planet’s surface, in addressing climate change mitigation, adaptation and resilience. “Dialogue” alone, however, won’t be enough. The ocean’s role must provide a basis for real, tangible action.

The role of the ocean, and nature in general, needs to be mainstreamed and recognized within the United Nations Framework Convention on Climate Change (UNFCCC), but not in a way that undermines and threatens the natural carrying capacity or even risks to push us further to a planetary boundary.

Rebecca Hubbard, Programme Director for Our Fish explains – at the COP27 Nature Positive Pavilion – the crucial role that fish play as the ocean’s carbon engineers and calls for UNFCCC & UN to mainstream good fisheries management as good carbon management

Bec shared this message at a high level event hosted by the Ocean & Climate Platform and French Agency for Development on November 10th, which focused on accelerating ocean-based climate action.

Early the next morning, Bec hosted Our Fish’s breakfast panel in the Ocean Pavilion, titled, well, Fish are Carbon Engineers!

With our guests, Intergovernmental Panel on Climate Change (IPCC) scientist Professor Hans-Otto Pörtner and Dr Emma Cavan of London Imperial College, we launched our briefing – Fish are Carbon Engineers. The ensuing discussion featured speakers from the scientific community and civil society discussing evidence in support of good fisheries management as effective carbon management, and opportunities for maximising this to deliver on climate action commitments.

The next morning – November 12th Bec joined the Seas At Risk event “What shipping and fishing must do to avert climate disaster” at the EU Pavilion online. The event brought together speakers engaged in EU shipping and fishing policy to discuss the need for an urgent and transformational shift in the maritime industry to raise ambition, meet climate targets and protect blue carbon. They also discussed the risks of climate tipping points and the need for both shipping and fishing’s green transition, as well  including support mechanisms for climate-vulnerable and the least developed countries. Check out the video here.

So what exactly happened at COP27?

The United Nations climate change conference, also known as COP27 (Conference of the Parties) took place in the appropriately semi-abandoned resort town of Sharm el-Sheikh on the shore of the Red Sea in Egypt – for two gruelling weeks. Tens of thousands of attendees, including the highest number of fossil fuel lobbyists ever seen at a COP, held events, lobbied, protested, networked and negotiated. With the latest IPCC reports warning that we are heading toward societal collapse as a result of breaching multiple planetary boundaries, the stakes were high.

Yet COP27 failed to deliver the level of ambition and ‘implementation’ necessary to avoid climate chaos. Commitment by governments to limit warming to 1.5 degrees was restated, but as recent reports show, actual real action to deliver these commitments is tragically slow – putting us on track for  warming of around 2.5 degrees. This would create a world that will be unlivable for millions (possibly billions) of humans and contribute to the extinction of many other species. Likewise, commitment to phasing out ALL fossil fuels was watered down from the text.

This is where the buck stops – whatever else we do, we must halve CO2 global emissions by 2030. There were also intense calls for putting our trust in carbon dioxide removal (CDR), which is considered by many as unproven, highly concerning, risky technology that the fossil fuel industry is using to continue business as usual and avoid the dire need to slash CO2 emissions.

On the upside, the COP finally agreed to create a specific Loss and Damage Fund to support those nations worst affected, however all of the details on what, who, where & how have been kicked down the road to COP28 (next year). And to make this Loss and Damage financing make sense, we still need to drastically slash emissions.

The good news is that the ocean featured strongly in the final text of the “Sharm el-Sheikh Implementation Plan”, welcoming the outcomes of the ocean and climate change dialogue in 2022, adding specific details for its future functioning, and more importantly encouraging parties to implement more ocean-based climate actions in their national action plans and Nationally Determined Contributions (NDCs).

As we said – we’re looking to further mainstream the ocean within the UNFCCC process – the inclusion of the ocean in COP27’s final text responds to Our Fish’s demands in our Fish are Carbon Engineers paper.

Ahead of December’s Convention on Biological Diversity (CBD) COP15 meeting in Montreal, Our Fish is calling on the EU to demonstrates that it is not just full of hot air – and that it will walk the talk and deliver the action necessary to halt the climate and biodiversity crisis, by accelerating a transition to low-impact, low-carbon fishing. 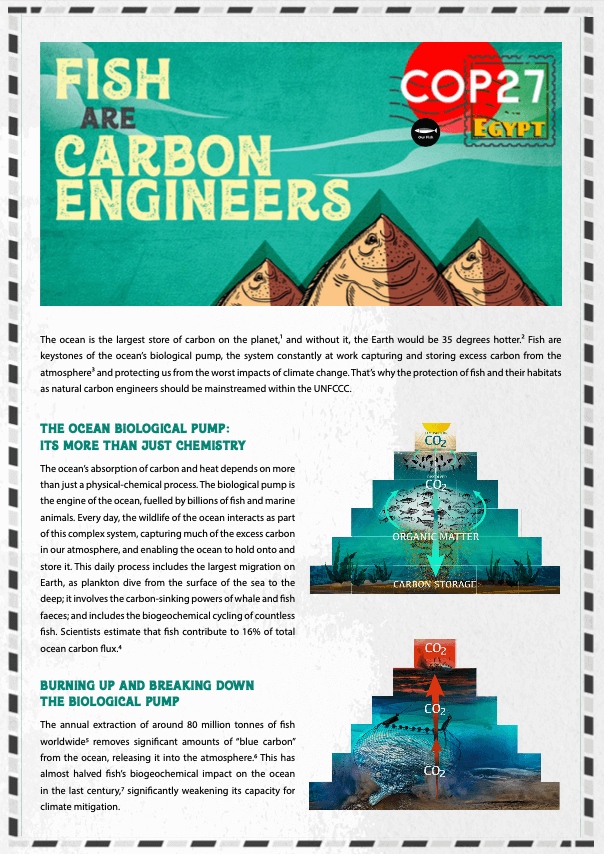