As delegates arrived at the meeting at the Danish Agrifish Agency they were greeted by supporters of the Our Fish campaign dressed in cod costumes, displaying a banner that calls on on Baltic governments to “Stop Overfishing”.

“While the BALTFISH deliberations are taking place behind closed doors, European citizens, as beneficial owners of Europe’s fish stocks, have the right to demand that these fisheries are managed according to the law. Our Fish is calling on Baltic governments to stop endorsing overfishing for the benefit of big trawling interests and instead support science-based quotas that will rebuild our fish stocks”, said Our Fish Program Director Rebecca Hubbard.

BALTFISH is a regional body consisting of government representatives from the eight EU nations bordering the Baltic, and is responsible for cooperating on the development of sustainable fisheries in the Baltic Sea. Today’s meeting is key in the preparations of governments to establish a position on fishing quotas for 2018, which will be decided at the October Agrifish Council meeting in Brussels.

The Council of EU fisheries ministers set 2017 fishing limits for four out of ten Baltic fish stocks above scientific limits, including a staggering 3.5 times the scientific advice for Western Baltic Cod, despite the fact that they were teetering on the edge of commercial collapse (1,2).

On August 29th, the European Commission released a proposal for fishing opportunities in 2018 to be considered by BALTFISH and the Council of Ministers, including a ban on European eel due and a rollover of the western Baltic cod Total Allowable Catch (TAC).

“Unfortunately, recent scandals about mismanagement of the Danish system for distribution of fishing rights by the Ministry for Food and Environment, confirm a tendency to prioritize the interests of a few powerful players in the fishing industry. Not only is this a problem for the future of the fishing industry, but also for the environment, as low impact fishermen have been struggling as a result. We urge the new Fisheries Minister, Karen Ellemann, to start restoring Denmark’s broken reputation by fighting to combat overfishing instead of feeding it,” says Magnus Eckeskog, oceans campaigner at Greenpeace.

“We are grateful to the Commission for finally moving forward on safeguarding the eel. Its now up to the Baltic member states to show how they interpret the Common Fisheries Policy and scientific advice on eel, and to commit to phase out a fishery on this endandgered species. It’s a no brainer that this is also the right thing to do across all EU nations,” said Nils Hoglund, Fisheries Policy Officer Coalition Clean Baltic.

“Given that the iconic Western Baltic cod’s population is still at the second lowest levels since the early 1980s and the Commission has acknowledged that ending overfishing sooner will deliver the highest economic and social benefits, we are shocked that they have recommended a rollover of the Total Allowable Catch for 2018 that will perpetuate overfishing of these fish stocks. (4) The European Commission and Baltic governments are reminded that EU fisheries law requires an end to the delay and obfuscation around fishing limits in order to restore all fish stocks to healthy levels in EU waters,” concluded Hubbard.

DOWNLOADS
Photo/video can be downloaded from http://bit.ly/BALTFISH17photo

Copenhagen, 30 August 2017: A report released today exploring Denmark’s role in overfishing within EU waters, finds that the country often portrayed as a green leader is delaying the environmental, social, and economic benefits that come from restoring and maintaining healthy fish stocks.

The report, How Denmark Can Make Fisheries Fair and Sustainable, co-authored by Our Fish and the New Economics Foundation, outlines how Denmark’s Government can end overfishing, address its quota scandal, and get in step with European fisheries law. Denmark can achieve this by setting fishing quotas according to scientific advice, allocating its fishing quota in a way that incentivises best environmental practices, and using national policy and the quota system to support vulnerable, low-impact fisheries during the transition to sustainable levels.

“The Danish government is the Baltic’s worst culprit when it comes to overfishing – in 2017, it topped the list of countries fishing above scientifically recommended limits, leading the public to believe that this is because of ‘socio-economics’. However, the figures tell a different story; not only would following scientific advice for fishing quotas bring higher economic returns sooner, but the current allocation of quotas benefits destructive trawlers that cause the biggest environmental impact while reaping significantly higher profits than low-impact coastal fishers,” said Our Fish Program Director Rebecca Hubbard. 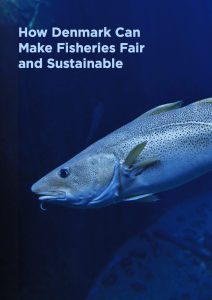 Recent controversies in Denmark have put fishing quotas both on the news agenda and at the centre of Danish politics, after the withholding of information to Parliament on available options to limit the concentration of fishing quotas resulted in Minister Esben Lunde Larsen receiving a ‘nose’ (reprimand) and the fisheries portfolio being moved to a new Ministry in August 2017 [1]. A recent auditors’ report has also confirmed that very little information exists on quota concentration altogether [2].

Western Baltic Cod stocks have spend years teetering on the edge of collapse, yet Denmark has consistently set fishing limits above scientific advice (3,4). Danish officials will welcome representatives from all EU Baltic states at BALTFISH in Copenhagen this week to discuss their position on Baltic fishing quotas for 2018. Advice from the trawl industry-dominated Baltic Sea Advisory Council is pushing for western Baltic cod fishing quotas to be more than 3,000 tonnes above the upper end of scientific advice (5).

“With the latest scandal around quota management in Denmark, it appears that a stone has been left unturned, and discussion is now forming around how fishing quota should be managed in the public interest”, continued Hubbard. “Just as fishing limits should be sustainable, they should also be fair. Now is the time for the new Danish fisheries minister Karen Ellemann to seize the opportunity to both set fishing quotas at sustainable levels, and change the quota allocation system to prioritise low-impact coastal fishers, and better ensure their economic viability and ecological sustainability”.

The report, How Denmark Can Make Fisheries Fair and Sustainable can be downloaded from http://bit.ly/DKBaltic2017en

Jobs, vessels and quota numbers from Table 1 in the released report.