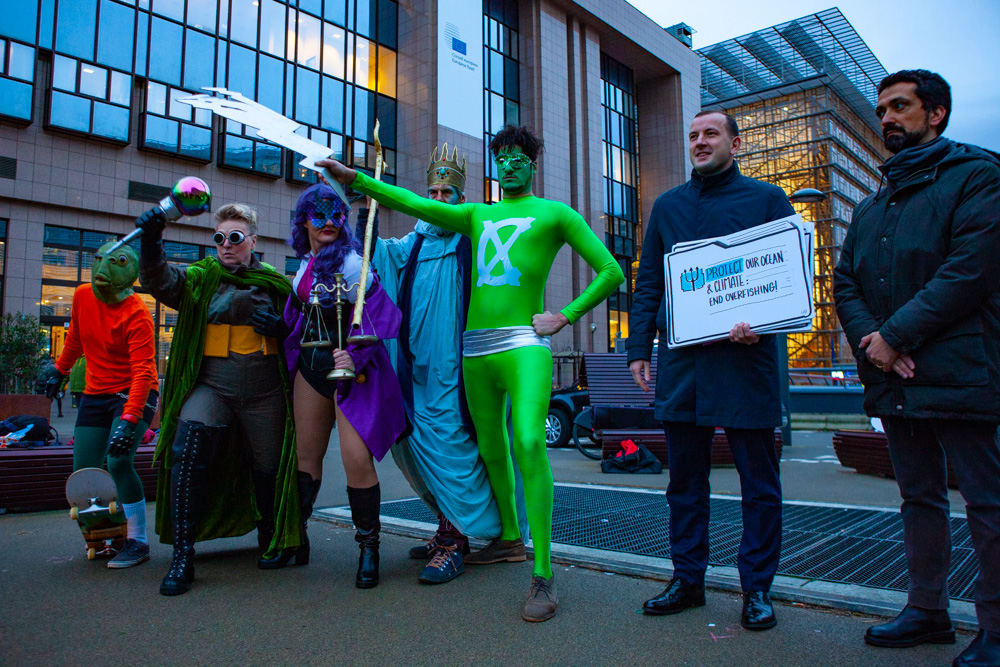 Brussels, December 16, 2019:- As EU Fisheries Ministers gather today in Brussels to set fishing levels for the North East Atlantic for 2020, 13-year-old Farrah Delrue and 10-year-old Josephine Seton – representing current and future generations – presented European Commissioner for Environment, Oceans and Fisheries Virginijus Sinkevičius, and Minister Jari Leppa representing the Finnish Presidency of the Council, with more than half a million signatures from EU citizens who are calling for an end to overfishing by EU member states. EU Member states are required to end overfishing by 2020, under the Common Fisheries Policy (CFP) [1,2].

The Ocean Avengers, a team of superheroes embodying the ocean, climate, law, science and the will of EU citizens, attended the handover, urging Commissioner Sinkevičius to convey the message “Ending overfishing IS Climate Action” to AGRIFISH ministers, and they must obey the law by setting fishing limits within scientific advice, in order to reduce one of the biggest threats to the ocean and its capacity to support life on the planet [3].

“This week, EU fisheries ministers could go from zero to superhero by recognising the demands of half a million EU citizens to end overfishing. This is their chance to take urgent and effective climate action to protect the ocean – our greatest ally against climate change” said Our Fish Programme Director Rebecca Hubbard. “Ministers also have the opportunity to help meet the aspirations of the European Green Deal, and to act on the EU Council’s recent imperative, which stresses that member states must give extra attention to delivering on SDG 2020 goals, and on implementation of the EU Common Fisheries Policy.” [4]

“EU fisheries ministers must support Commissioner Sinkevičius by following the most cautious scientific advice when setting fishing limits for 2020” said Gonçalo Carvalho, Executive Coordinator of Sciaena. “Forty percent of North East Atlantic fish populations are still overfished by the EU, despite the 2020 deadline to end this practice. By playing to narrow, short-term politics and profits, fisheries ministers now face even tougher decisions for fish like cod. It’s time to turn things around – fisheries ministers must stop trying to negotiate nature’s limits, show some political courage, and use the scientific advice for maximum sustainable fishing catches without any more delays.”

Overfishing – removing fish from the sea at a rate too high for fish populations to replenish themselves, was outlawed by the reformed common fisheries policy in 2013, with EU fisheries ministers obligated to meet a 2020 legal deadline to eradicate the practice [2]. However, fisheries ministers have repeatedly surpassed the limits advised by scientists when setting fisheries quotas – setting quotas above scientific advice in six out of every 10 cases since the CFP was reformed in 2013 and rarely set fishing quotas at more sustainable levels than the EU Commission proposes [5].

The annual EU AGRIFISH Council meetings were recently investigated by the EU Ombudsman and found to be lacking in transparency [6].

“EU fisheries ministers have acted as though they were accountable to no one for too long,” said Flaminia Tacconi, at ClientEarth. “The EU Ombudsman has confirmed that they are non-transparent and that this process undermines the quality of their decisions for all EU citizens. This year, that must change. They must respect the law and set fishing limits at sustainable levels in line with scientific advice – for the good of all EU citizens not just a few in the fishing industry. The 2020 deadline to end overfishing is not an aspirational deadline to be missed and forgotten about – breaking the law has serious consequences.”

A recent study, co-authored by Dr Rashid Sumaila, Professor and Director of the Fisheries Economics Research Unit at the University of British Columbia’s Institute for the Oceans and Fisheries demonstrates that ending destructive overfishing is essential to build ocean resilience and can mitigate the impacts of climate change. [5]

It’s there for a reason: Why Ministers must not exceed scientific advice on fishing quota Griffin Carpenter, New Economics Foundation

On Friday 6th December, during COP25 in Madrid, a group of ocean experts, including the UN Special Envoy for the Ocean Peter Thomson and Dr Sumaila called for immediate action by governments worldwide to end overfishing in order to mitigate the impacts of climate change on the world’s oceans [7].

Why EU Prime Ministers Must Act to End Overfishing This Week

This information also appears on http://www.climateocean.com and in this week’s Politico newspaper in Brussels.

In 2013, after decades of overfishing and destructive fishing practices led to empty seas, vanishing jobs and plummeting profits, millions of citizens demanded that EU lawmakers deliver an ambitious reform of the Common Fisheries Policy (CFP). This new CFP would bring back sustainable, thriving ocean ecosystems that could secure the future for the next generation of Europeans. While not perfect, it put in place key objectives, including a legal obligation to end overfishing by 2020 – at the latest. So far, EU fisheries ministers have failed to make substantive progress on implementing the CFP. For example, around 40% of North East Atlantic fish stocks are still overfished.

To end overfishing – in accordance with EU laws, annual fishing limits must be set in line with scientific advice. The EU receives this advice from the International Council for the Exploration of the Sea (ICES) – yet does not always follow it. It’s as simple as it sounds – following scientific advice would not only rebuild fish populations, it would end the ‘boom and bust’ cycle of current management, which has resulted in certifications being removed for fish like North Sea cod. The EU Council of AGRIFISH Ministers, which has the ultimate say in setting fishing quotas, has exceeded scientific advice in six out of every ten cases since the CFP reform in 2013.

Our ocean is sick. But fishing quotas – if properly used – can allow fish populations to recover, and help restore ocean health. This is especially crucial when many EU fish populations are at a fraction of historical levels. When quotas follow scientific advice, research shows that increases in abundance follow. But the ocean is a diverse ecosystem, not a farmland with individual crops, so we must manage fish populations with an ‘ecosystem-based approach’. This means that even if one or two commercial fish stocks are very profitable, they should not be exploited to the detriment of other fish populations or the overall ecosystem.

EU fisheries ministers have spent six years delaying an end to overfishing – and this comes at a cost. If we had more abundant fish populations, fewer fishing trips would be required – lowering costs – as fish become easier to catch. More abundant fish populations also mean that future harvests would be larger than current catches – increasing revenues – like interest payments on a larger bank account. If North East Atlantic fish populations were rebuilt, they could deliver an estimated €4.64 billion/year rather than just €0.1 billion, and generate an extra 20,000 jobs. Ending overfishing is common sense economics.

Despite all the benefits of ending overfishing, continued political delay from Fisheries Ministers has made things worse, so some big cuts to fishing quotas are needed this year. While the citizen, science, health and economic cases for ending overfishing, all demonstrate a clear ‘should’, the legal status of the Common Fisheries Policy requires sustainable fishing limits in 2020 as a ‘must’. The Common Fisheries Policy deadline is not an aspirational deadline to be missed and forgotten – it is the law. EU citizens have to follow laws, why not EU Fisheries Ministers?

Ending overfishing is climate action. The ocean regulates the climate, absorbs CO2, gives us every second breath, and has absorbed over 90% of excess global heating – we need our ocean to be healthy if we are to contend with climate change. Overfishing is one of the greatest pressures on the ocean; rebuilding fish populations would decrease CO2 pollution, increase carbon capture, restore the marine food web, and create a more resilient ocean ecosystem. But if ending overfishing is a fundamental and achievable emergency climate action, why are EU fisheries ministers undermining the work being carried out by their own governments to mitigate the impacts of the climate crisis?

Our Fish: Save Our Fish

We Move: Save Our Seas

“…the Union should improve the CFP by adapting exploitation rates so as to ensure that, within a reasonable time-frame, the exploitation of marine biological resources restores and maintains populations of harvested stocks above levels that can produce the maximum sustainable yield. The exploitation rates should be achieved by 2015. Achieving those exploitation rates by a later date should be allowed only if achieving them by 2015 would seriously jeopardise the social and economic sustainability of the fishing fleets involved. After 2015, those rates should be achieved as soon as possible and in any event no later than 2020. Where scientific information is insufficient to determine those levels, approximative parameters may be considered.”

[4] EU Council conclusions on Oceans and Seas, General Secretariat of the Council, 13845/19.

On 19th November, the EU Council adopted Conclusions on Oceans and Seas, highlighting that climate change is a direct and existential threat to life in the ocean and that “member states unanimously stress the need for immediate action against increasing threats on our oceans, seas and coastal areas.”

Joint NGO recommendations on the setting of Northeast Atlantic fishing opportunities for 2020 https://our.fish/publications/joint-ngo-recommendations-on-the-setting-of-northeast-atlantic-fishing-opportunities-for-2020/

NGO Letter: transparency and accountability in setting the 2020 fishing opportunities