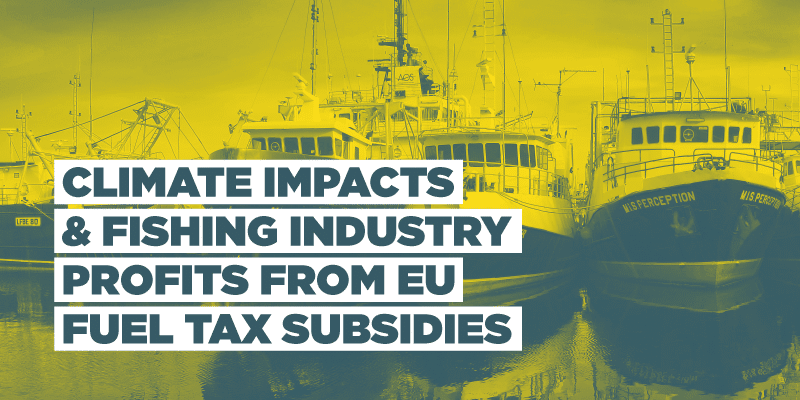 Brussels, Monday 20th September: The EU fishing fleet receives a tax break of between €759 million and €1.5 billion from fuel tax subsidies each year, as well as producing nearly 7.3 million tons of CO2 just from burning fuel, according to a report published today by the Our Fish campaign.

The report, Climate Impacts & Fishing Industry Profits From EU Fuel Tax Subsidies, which estimates the fossil fuel tax subsidies received for the entire EU fishing fleet, and features case studies from France, Spain, Portugal, Italy and The Netherlands, finds that the destructive and fuel-hungry fishing vessels benefit the most from these perverse subsidies, while the climate, fisheries, and small-scale fishers suffer the consequences.

“Each year, the most destructive sectors of the EU fishing fleet are being paid to produce millions of tonnes of CO2. While European citizens are expected to pay fuel tax to use their cars, the fishing industry avoids paying between €759 million and over €1.5 billion in taxes each year [1],” said Rebecca Hubbard, Program Director of Our Fish. “These tax breaks from the EU not only worsen overfishing and jeopardise ocean health, they fuel climate change, the impacts of which will further disadvantage low-impact small-scale fishers.”

“In the fishing industry, environmentally harmful subsidies have created a skewed system which incentivises larger vessels and fleets to engage in practices that actively harm the marine environment and deplete already threatened fish stocks”, said Grace O’Sullivan, Member of the European Parliament, Rapporteur for the EU’s 8th Environment Action Programme.  “This is unacceptable, and a key obstacle to achieving the emissions reductions and corrective measures urgently needed to address the climate and biodiversity crises.“

“The European Parliament has voted to support the 8th Environment Action Programme (EAP), on which I am the Parliament’s lead negotiator, seeking to set a deadline of 2025 for the phase out of fossil fuel subsidies and 2027 for the phase out of other environmentally harmful subsidies in the EU”, she continued. “Success and progress around that position now depends on the outcome of the next step in the process, trilogue negotiations with the European Council and Commission, which are currently underway.”

“The 8th EAP, is an opportunity to see decisive binding deadlines in the EU to phase out environmentally harmful subsidies and see an end to the practice of giving tax breaks and wasting public money, which add to the destruction of already vulnerable marine ecosystems, and put more sustainable, low-impact small-scale fishers, their families and communities at a disadvantage”, concluded O’Sullivan.

“At this point of the climate emergency, every ton of CO2 counts. The EU has an obligation under the new European Climate Law to eliminate as much CO2 as possible in order to reach climate neutrality by 2050”, said Hubbard. “This is an opportunity to drive a rapid transition to low-carbon, low-impact fishing, by ensuring the fishing industry pays its taxes.”

“The revision of the Energy Taxation Directive proposes a small, nominal tax for the fishing industry, but this will do nothing to halt the climate crisis or restore the EU’s overfished and unhealthy seas. Tax exemptions for the fishing industry should be completely removed from the revised directive and all energy products taxed according to their energy and carbon content. This will simultaneously increase the budget of EU member states and help fund a transition to a more sustainable fisheries sector that doesn’t cost the earth”, concluded Hubbard.

[1] This is based on the calculation of litres of fuel consumed by EU fleets multiplied by a potential tax rate. Fuel consumption data comes from the Annual Economic Report on the EU Fishing Fleet 2020 (AER) by the Scientific, Technical and Economic Committee for Fisheries (STECF). No marine fuel is taxed in the EU or has been taxed in the past, therefore tax percentages used are based on assumptions. For the purposes of the report, we assume that taxes on gas oil would be most relevant to the fishing industry sector. Following the EU Council Directive on the taxation of energy products, we use the minimum level of taxation applicable to motor fuels, which is €0.33/l as our lower estimate, and the historic EU weighted average excise duties for gas oil for road transport, which is €0.67/l as our upper estimate, to give a potential likely range of taxes that the fishing industry would have paid.

As of 2018, the EU fishing fleet burns 2.3 billion litres of fuel each year

That is an estimated €759 million – €1.5 billion taxes avoided each year