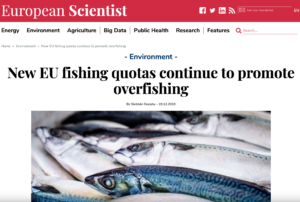 After tense all-night talks in Brussels, the council of European ministers agreed on 2020 catch limits for Europe’s most important fish stocks early on Wednesday 20 December. While ministers believe they reached a balance in respecting both the environment and socio-economic sustainability, NGOs have slammed the agreement.

The deal, which mainly focused on the Atlantic and the North Sea will ‘protect the future of the fishing industry’, said the Minister for Agriculture, Food and the Marine. But ministers seem to have ignored the science in favour of short-term profits.

The limits pushed through by ministers from across the EU are much higher than advised by scientific experts, and have stamped out any hope of bringing unsustainable fishing practices to an end next year.

Rebecca Hubbard from Our Fish, an NGO focused on sustainable fishing management, criticized the EU council of fisheries ministers for displaying a ‘shocking ignorance of the global biodiversity and climate crisis’. Hubbard says Ministers have not followed the advice of scientists for setting sustainable quotas.

‘Ending overfishing would be a rapid, achievable act that would bolster the health of the ocean in the face of the climate crisis, securing futures for coastal communities, as well as being a firm response to calls from EU citizens for climate action’, said Hubbard.