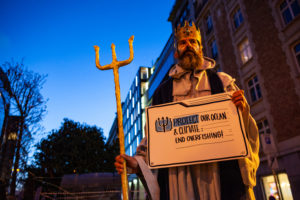 Video and audio will be available here

Brussels, December 18, 2019:- As the EU AGRIFISH Council meeting closed in Brussels this morning following all-night negotiations, the Our Fish campaign blasted EU fisheries ministers for not only failing to meet their own legal deadline for ending overfishing by 2020, but refusing to pull their weight to address the climate and biodiversity crises, after they agreed to continue overfishing.

“They’re just not getting it. Demonstrating a shocking ignorance of the global biodiversity and climate crisis, the EU Council of Fisheries Ministers refused to follow scientific advice, instead greenlighting another year of overfishing – missing both their own deadline for ending overfishing by 2020 and squandering a prime opportunity for EU leadership on decisive emergency climate action,” said Our Fish Programme Director Rebecca Hubbard.

“The EU committed to ending overfishing back in 2013, yet fisheries ministers have spent six years kicking the can down the road. Today’s appalling outcome demonstrates that they cannot be entrusted with restoring healthy ocean ecosystems and that they are incapable of doing their bit to achieve EU ambitions for combating climate change,” she continued. “Ending overfishing would be a rapid, achievable act that would bolster the health of the ocean in the face of the climate crisis, securing futures for coastal communities as well as being an affirmative firm response to calls from EU citizens for climate action.”

Today’s retrograde decision by EU fisheries ministers to continue overfishing comes in sharp contrast to last week’s European Green Deal announcement, the EU member state agreement for achieving carbon neutrality by 2050 and the conclusion of COP25, where the crucial role of the ocean in regulating climate was recognised.

Over 500,000 Europeans have signed petitions to fisheries ministers to deliver on their commitment under the EU common fisheries policy to end overfishing by 2020 [1]. Over 1,800 individual messages written by EU citizens were presented to the EU Council of Prime Ministers via the executive vice-president Timmermans and the Finnish Presidency of the EU council last Thursday, calling for the EU to deliver decisive emergency climate action and follow the science to end overfishing [2].

All EU member states have signed up to end overfishing by 2020 through numerous regional and international forums; EU Common Fisheries Policy [3], UN Sustainable Development Goal 14.4 [4], and most recently in the EU Council Conclusions on Oceans and Seas [5].

“Ending overfishing is critical to acting on the climate emergency. In the coming weeks and months we will work with the new Commissioner for the Environment, Oceans and Fisheries Virginijus Sinkevicius to achieve this,” concluded Hubbard.

Video and audio in multiple languages will be available here

Our Fish: Save Our Fish

We Move: Save Our Seas

[4] UN SDG 14.4: By 2020, effectively regulate harvesting and end overfishing, illegal, unreported and unregulated fishing and destructive fishing practices and implement science-based management plans, in order to restore fish stocks in the shortest time feasible, at least to levels that can produce maximum sustainable yield as determined by their biological characteristics. https://sustainabledevelopment.un.org/sdg14

[5] EU Council conclusions on Oceans and Seas, General Secretariat of the Council, 13845/19. https://www.consilium.europa.eu//media/41384/st14249-en19.pdf?utm_source=dsms-auto&utm_medium=email&utm_campaign=Oceans+and+seas+threatened+by+climate+change%3a+Council+adopts+conclusions