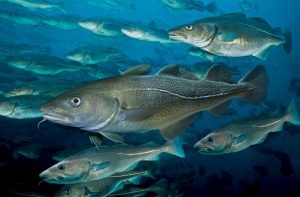 Brussels May 29, 2019:- Responding to scientific advice that a number of important Baltic fish populations are in a state of crisis and cannot be fished sustainably, four non-governmental organisations have demanded a halt to fishing for western Baltic herring and eastern Baltic cod for 2020 – and to end overfishing, as is required by EU law. Coalition Clean Baltic, Oceana, Our Fish and WWF today called on the European Commission – which is responsible for proposing fishing limits – and on fisheries ministers – who make the final decisions, to not exceed the scientific advice provided by the International Council for the Exploration of the Sea (ICES) when setting all fishing limits in the Baltic Sea.

“Western and eastern Baltic cod, as well as western Baltic herring, underpin the Baltic Sea’s ecosystem, yet decades of overfishing, and the ignoring of scientific advice by the EU Commission and Baltic governments, has been one of the drivers of destruction and a tragedy for the coastal communities”, said Ottilia Thoreson, Director, WWF Baltic Ecoregion Programme. “Due to these years of destruction and neglect, we are now facing a situation where fishing must be halted, if we are to have a chance to fish and sustain livelihoods in the future”.

“The only sane response to the collapse of the eastern cod population is to stop all fishing now and develop a recovery plan, rather than wait for 2020”, said Nils Höglund, Fishery and marine policy officer, Coalition Clean Baltic. “With this clear advice from ICES, EU Member States must act without delay – and if they do not, the Commission must take action – there are still fish that can be saved, and spawning season is happening right now”.

“The European Commission has a responsibility to start pulling Baltic fisheries back from the brink and rebuilding its ecosystems, when it proposes the fishing limits for 2020. When doing so, it is essential for the Commission to put forward fishing limits that do not exceed scientific advice, to set an example for member states on responsible fisheries management”, said Andrzej Białaś, Policy Advisor, Oceana.

“All EU governments committed to end overfishing and to return our seas to good health, when they signed up to the reformed Common Fisheries Policy in 2013. Yet six years later, the situation in the Baltic Sea is worsening, with governments still caving in to short term industry pressure [5]. This year, the EU Commission and Baltic member states, must follow the science, and begin managing our fisheries and Baltic Sea ecosystem for the long term benefit of all citizens and nature, not just the short-term profits of a few”, said Rebecca Hubbard, Programme Director, Our Fish.

The Common Fisheries Policy demands that exploitation of all fish stocks is sustainable by 2020, without exceptions. Yet, for two years in a row, the Commission has requested ICES advice for fishing limits to Baltic plaice that do not meet these requirements, which only serves to undermine its own ambition, and that of Member State governments to fish at sustainable levels [6]. If the European Commission would like to contribute to Baltic Sea wealth and restoration they should fully respect Common Fisheries Policy requirements.

Western Baltic herring is in crisis: scientific advice from ICES to stop fishing last year was ignored, and the population has been further depleted this year [4]. ICES scientific advice suggests that the herring population will not recover unless emergency measures are taken to save the fishery, including an immediate halt on fishing. For the year 2020, ICES still advises a fishing limit of zero tonnes.

Western Baltic cod is still in a precarious state with estimates of the population revised down by over 60% this year [2]. ICES warns that the number of young fish entering the fishery in 2018 and 2019 are the lowest on record, and reports that if this doesn’t change in the coming years, there will be a rapid decline in the population. ICES therefore suggests to use the lower value when setting the fishing limits. This equates to zero catches in subdivision 24 (Baltic Sea west of Bornholm) in order to comply with the zero catch advised for eastern Baltic cod (where there is mixing of eastern and western Baltic cod), and a commercial fishing limit of between 2,329 and 3,065 tonnes of western Baltic cod for subdivisions 22-23 [2].

Also: Ices (2018) advice- that there should be zero catch – was ignored