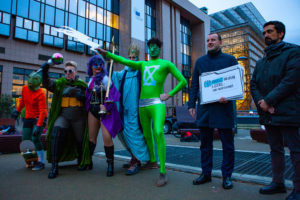 On 19 December, as he entered the European Council building for environmental talks, EU Commissioner for Environment, Oceans and Fisheries, Virginijus Sinkevičius tweeted, “We are ready to discuss our plans for transformative change to protect and restore our Nature.”

Yet, a day earlier, Commissioner Sinkevičius announced during an early morning press briefing that he had agreed with the Council of Fisheries Ministers that they would continue destroying nature – that is, the EU member states would continue overfishing in the northeast Atlantic in 2020. He even posted a celebratory tweet, claiming: “That is why tonight we put the long-term interest of the European fisheries first!“

While we appreciate that all-night EU AGRIFISH negotiations may necessitate tough political decisions, agreeing to continue overfishing is in the long-term interest of no-one – least of all the fishing industry – and should be lamented, not celebrated.

By agreeing to another year of destructive overfishing, the EU is embarking on a retrograde change, not a transformative one. Fish are more than a menu item, more than a commodity to be extracted. They are a critical part of the most important ecosystem on Earth – the ocean. Overfishing remains the largest threat to ocean biodiversity, and is not consistent with the European Commission’s strategy for responding to the crisis facing the planet and our life support system.

“We must put an end to this cognitive dissonance: we cannot claim to be saving nature or to be taking impactful climate action while celebrating continued ocean destruction.”

Before the AGRIFISH negotiations had kicked off, Commissioner Sinkevičius, along with a representative of Executive Vice-President Timmerman, had accepted half a million signatures and thousands of personal messages from EU citizens, calling for the EU to end overfishing and deliver climate action. Despite this, the Commission and EU fisheries ministers chose to miss this opportunity to rebuild ocean health and combat climate change.

The EU Commission cannot hope to deliver real world change with an EU Green Deal if it simply facilitates or rewards the same behaviour that created the problem in the first place, such as overfishing. We must put an end to this cognitive dissonance: we cannot claim to be saving nature or to be taking impactful climate action while celebrating continued ocean destruction.

Commissioner Sinkevičius and Executive Vice-President Timmermans, you know what needs to be done; just like our scientists, firefighters, health professionals and students know. If you truly wish to deliver transformative change for nature and life on the planet, you must prioritise the preservation of our life support system.

We must stand together to put a decisive and immediate end to overfishing.