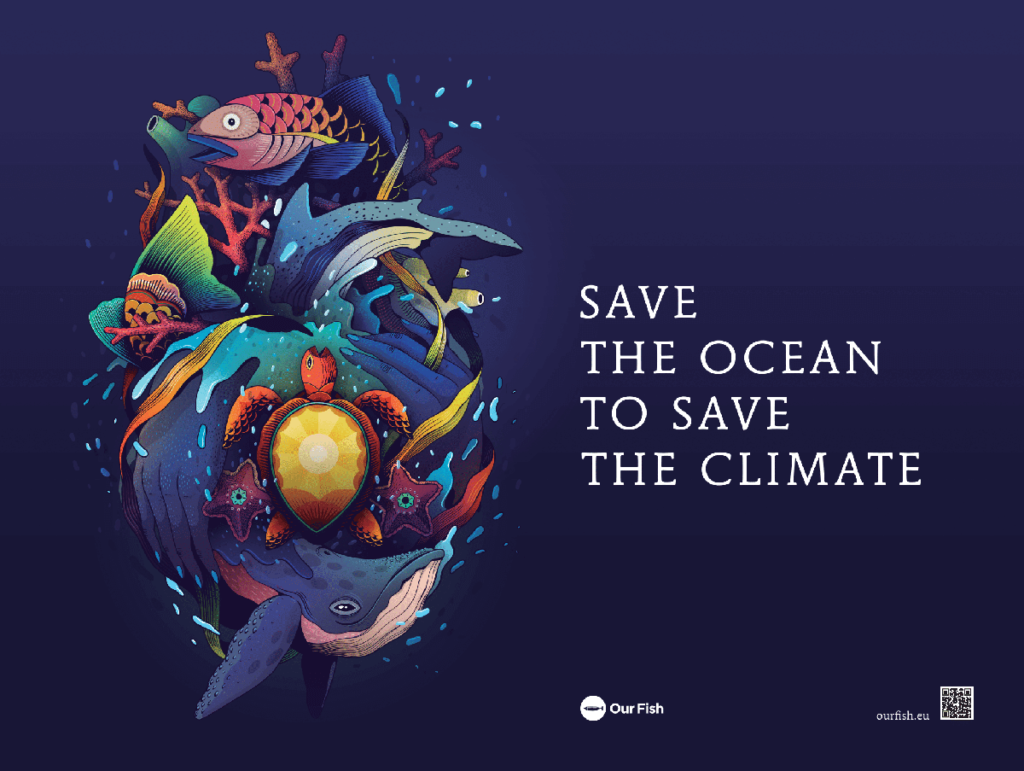 Save the Ocean to Save the Climate: Illustration by Boa Mistura.

By Emma Cavan, Erica M. Ferrer and U. Rashid Sumaila

We are three scientists from different life backgrounds and professional pathways: female and male; Latin-American, African and Anglo heritage; student researcher, doctor and professor; biogeochemist, marine biologist, and economist. But as diverse as our fields of study may seem, two things unite us: we have known for a long time that a healthy ocean is critical to life on earth; and, more recently, we’ve learned that healthy fisheries are a crucial and deliverable part of climate action.

We want the world to know that conserving fish, fisheries, marine ecosystems, and the carbon services they provide, will help us secure the environmental future we need. Ocean issues, including but not limited to fishing, should hold a greater place front-and-center when it comes to drafting climate policies, and we view the UN climate conference, COP26 in Glasgow, as a prime opportunity to make that happen.

Humanity is nothing without the ocean. It is the source of all life on our planet, it produces half the oxygen we breathe, provides a reservoir for biodiversity, and is the second largest store of carbon on Earth. Currently, the ocean takes up (“sequesters”) 20-30% of global emissions, and has absorbed over 90% of the excess heat generated since the start of the industrial revolution. Without the cooling effect of the ocean, the global temperature would be, by some estimates, 35°C degrees warmer, making life on unearth untenable for most species, ourselves included.

Evidence that burning fossil fuels releases carbon dioxide and is bad for the climate has been apparent now for decades, but the data and understanding of fish and fishing’s influence on the ocean’s capacity to store that carbon is less well known. Fortunately, this knowledge has been rapidly advancing in recent years.

We are members of a group of scientists working to understand how ending overfishing would improve ocean health, and in turn, contribute to improving the ocean’s ability to store carbon. The ocean may be the source of all life on our planet, but it is also on the frontlines of what the UN Secretary General, Antonio Guterres, describes as “humanity’s war on nature”. In the case of the ocean, this war is fought in part with industrial fishing vessels, designed to track down and capture massive amounts of fish.

If we continue on this path, we might trigger irreversible changes to the ecological conditions under which humanity has evolved and thrived. To navigate ourselves out of this mess, we must turn the political landscape that equipped and enabled this war into one which recognises ocean biodiversity, and the preservation of healthy fish populations, as integral to climate and ecological “success”. In order to achieve this, countries must demobilise and redirect, retool and re-equip their fisheries; instead of racing to catch shrinking fish populations, we need to fish less, and in ways that respect marine food webs, while ending the obliteration of so-called ‘unwanted’ species, and supporting human livelihoods. At the same time, we must acknowledge and support the efforts of fishing operators striving to fish sustainably, and support small-scale fishers and coastal communities in becoming more resilient to climate change. Research shows that this way is possible, it absorbs more carbon, has lower carbon emissions, and is good for both people and profits.

A recent paper by Enric Sala and colleagues outlines how all marine sediments combine to form the largest pool of organic carbon on the planet, however, destructive fishing methods such as bottom trawling cause the release of CO2 stored in marine sediment. By their estimates, approximately 1.47 billion tonnes of carbon are released by bottom trawling every year, a similar volume to emissions from the global aviation industry. For Europeans, this is especially relevant because new research shows that European seas are some of the most heavily trawled but carbon-rich. The ocean is a fantastic source for solutions, but to unlock them, evidence shows that we must lock out destructive fishing practices.

Ocean solutions to climate change can provide up to one-fifth of the necessary emissions reductions we need if we are to limit climate change to 1.5°C, and leaving fish in the ocean can contribute to these efforts. This is new, it’s exciting, and it’s climate action that we can (and we desperately need to) deliver quickly.

At the COP26 negotiations in Glasgow, nature will be discussed as central to strategies on lessening climate change. And although the third ‘Because the Ocean’ declaration will be launched by coastal/island nations from across the globe, and other blue carbon events will explain the incredible benefits of ocean-climate solutions, these are likely to play second fiddle to the nitty gritty of carbon counting that goes in the official negotiations.

On the eaves of this year’s conference, that is the 5th COP since the signing of the Paris Agreement, many big-emitter countries are struggling to demonstrate how their promises to reduce emissions will be enough to substantively curb the climate emergency we’re in. And in some cases, even our language is lacking, where for example any mention of the ocean during negotiations has been few and far between.

We have known for decades that ending overfishing is the right thing to do for fishers and for biodiversity, and increasingly so, we see how protecting the ocean and its many inhabitants offers us real, decisive and essential means to partake in “climate action”. As scientists who study fish and fisheries, we contend that every country with an ocean-going fleet can take steps to enact ocean-climate action today by phasing out destructive fishing practices (including overfishing), and counting fish as part of their national inventories of carbon emissions and storage. A healthy ocean isn’t a sideshow to climate action, it is essential, and we need to start treating it as such.

Emma Cavan is a Research Fellow at Imperial College, London

Rashid Sumaila is a University Killam Professor at the University of British Columbia, Vancouver