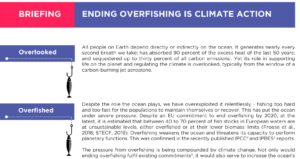 All people on Earth depend directly or indirectly on the ocean. It generates nearly every second breath we take; has absorbed 90 percent of the excess heat of the last 50 years; and sequestered up to thirty percent of all carbon emissions. Yet its role in supporting life on the planet and regulating the climate is overlooked, typically from the window of a carbon-burning jet aeroplane.

Despite the role the ocean plays, we have overexploited it relentlessly – fishing too hard and too fast for the populations to maintain themselves or recover. This has put the ocean under severe pressure. Despite an EU commitment to end overfishing by 2020, at the latest, it is estimated that between 40 to 70 percent of fish stocks in European waters are
at unsustainable levels, either overfished or at their lower biomass limits. Overfishing weakens the ocean and threatens its capacity to perform planetary functions. This was confirmed in the recently published IPCC and IPBES reports.
The pressure from overfishing is being compounded by climate change. Not only would ending overfishing fulfil existing commitments, it would also serve to increase the ocean’s capacity to mitigate the effects of climate change, which is disrupting the physics, chemistry and ecology of the ocean, with significant consequences for marine life. Ending overfishing would be significant action on climate.

In short, a recent paper has concluded: