Home > publications > Briefing: Did the UK Throw Away 7,500 tonnes of North Sea Cod? 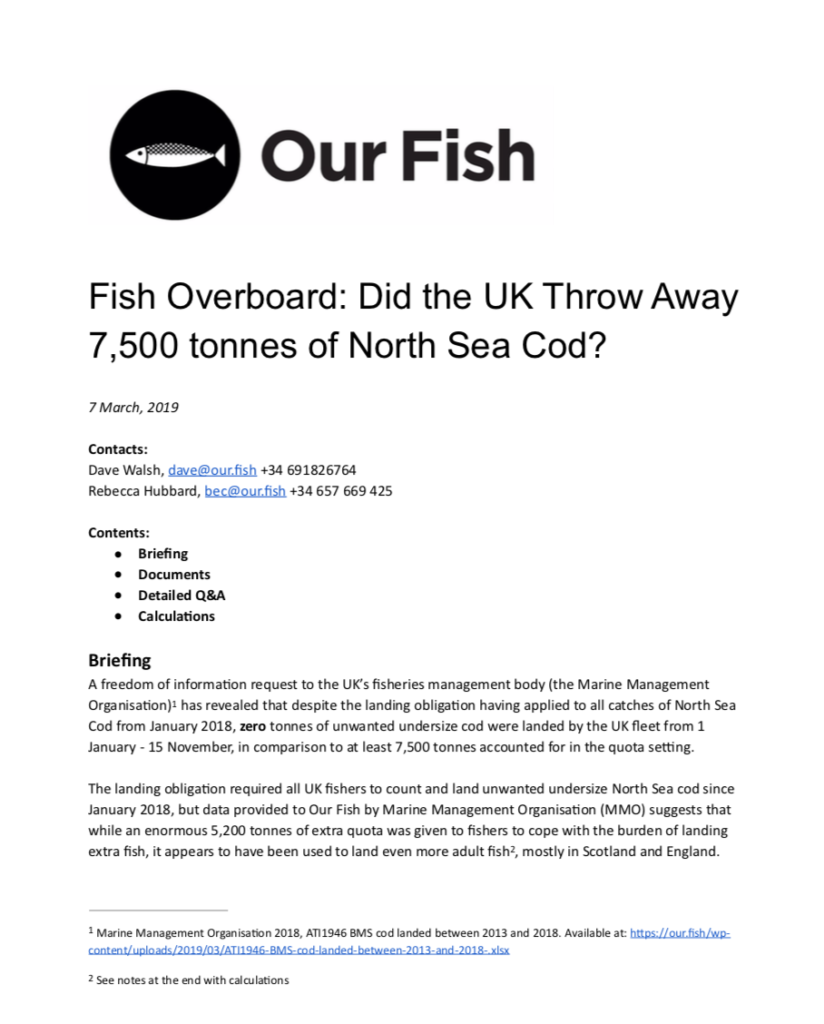 A freedom of information request from Our Fish to the UK’s fisheries management body (the Marine Management Organisation) has revealed that despite the landing obligation having applied to all catches of North Sea Cod from January 2018, zero tonnes of unwanted undersize cod were landed by the UK fleet from 1 January – 15 November, in comparison to at least 7,500 tonnes accounted for in the quota setting.

The landing obligation required all UK fishers to count and land unwanted undersize North Sea cod since January 2018, but data provided to Our Fish by Marine Management Organisation (MMO) suggests that while an enormous 5,200 tonnes of extra quota was given to fishers to cope with the burden of landing extra fish, it appears to have been used to land even more adult fish, mostly in Scotland and England.

“Of an estimated 5,200 tonnes of expected undersize cod, absolutely zero had been landed by November 2018. The UK instead landed a total catch of 21,596 tonnes of adult cod. This suggests that, extrapolating the percentage of undersize fish, at least 7,500 tonnes of undersize fish were illegally discarded, and the UK’s total catch of North Sea cod could actually have been over 29,000 tonnes, or around one third above the quota”, said Rebecca Hubbard, Program Director for Our Fish. “This unreported catch would represent an enormous waste of valuable fish, and significantly worsen overfishing of the iconic north sea cod stock. This is extremely concerning; in recent years north sea cod was thought to be recovering, however the outlook is again looking very poor with scientists recommending a huge cut for 2019 fishing limits.”