As the Marvel superhero movie Deadpool 2 opens in cinemas around the world, why is Hollywood star Josh Brolin, who plays Nathan Summers/Cable, posing naked with a fish on his Instagram account? 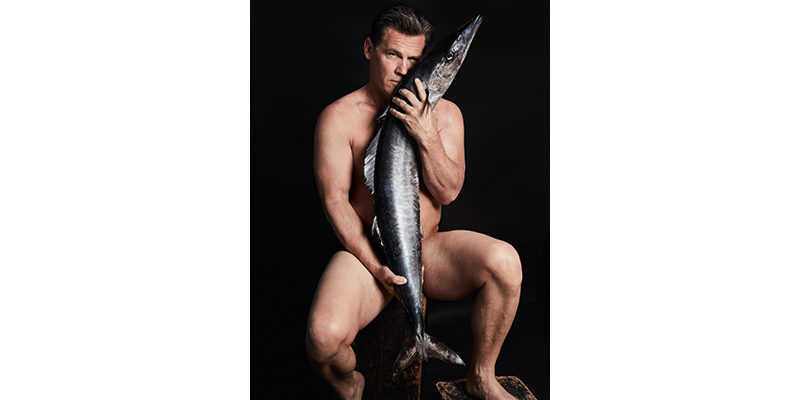 Photo caption: Josh Brolin supports the Our Fish campaign to end European overfishing by posing with a fish for Fishlove © Fishlove/Alan Gelati

London 14 May 2018:- As the Marvel superhero movie Deadpool 2 opens in cinemas around the world, why is Hollywood star Josh Brolin, who plays Nathan Summers/Cable, posing naked with a fish on his Instagram account?

Brolin’s mysterious post, which has attracted more than 100,000 likes, shows the actor holding a sustainably caught wahoo (Ono) from Hawaii, as part of the Fishlove photography project, which raises awareness of unsustainable fishing practices that are destroying the earth’s marine ecosystem.

Brolin’s image is one of many to come in 2018, from Fishlove, in partnership with Our Fish, which campaigns to ensure European governments achieve sustainable fish stocks in European waters.

“The series we’re putting together now will feature some of the most recognisable faces on the planet,” says Nicholas Röhl, co-founder of Fishlove with Greta Scacchi, who has recently returned from his first trip to Los Angeles. “Fishlove is a visual petition by actors and well-known personalities who want overfishing to end,” he says.

“The Year 2020 sounds like a dystopian Hollywood movie – yet this is the deadline set by the EU for ending overfishing of fish stocks and we are now hurtling towards it, with our governments asleep at the wheel”,said Our Fish Programme Director Rebecca Hubbard. “Overfishing and climate change are putting fish stocks under pressure, and threatening the health of ocean ecosystems and food security.”

“Even though a ban on discarding fish is being phased in, behaviour at sea hasn’t changed: there are still tens of thousands of tonnes of fish being thrown overboard in European waters. Every EU country must enforce the discard ban and put an end to illegal and unreported discarding, and end overfishing. Denmark, Netherlands, Germany, France, Spain and the UK are the most important players and must work together to reach European and international targets – and return European fisheries to a healthy state.”

A petition to end overfishing and discarding, and protect European marine environments, has over 179,000 signatures. View the petition.

Photographer AND caption MUST be added to any usage of this image:

Photo caption: Josh Brolin supports the Our Fish campaign to end European overfishing by posing with a fish for Fishlove © Fishlove/Alan Gelati

Fishlove was set up in 2009 by Nicholas Röhl, co-owner of MOSHIMO, and actress Greta Scacchi to raise awareness of the unsustainable fishing practices that are destroying the earth’s marine ecosystem.

Since then, the Fishlove images have succeeded in bringing the subject of over-fishing to the front covers and pages of the world’s media many times over. It is a visual petition of amazing people, including Sir Ben Kingsley, Sir Michael Gambon, Sir Richard Branson, Melanie Laurent, Fiona Shaw, Terry Gilliam, Kenzo, Dame Judi Dench, Emilia Fox, Mark Rylance, Emma Thompson, Helena Bonham-Carter, and Imelda Staunton, to save our seas.

In acknowledgment of the central role Fishlove has played in promoting fish conversation as part of the reform of the EU Common Fisheries Policy in 2013, a major and influential exhibition of the portraits was held at the European Commission in Brussels at the invitation of Maria Damanaki, then EU Commissioner for Maritime Affairs and Fisheries.

Helena Bonham-Carter’s image with a tuna, released in 2015, is credited with having helped persuade the UK government to commit to establishing some of the largest, fully protected marine reserves on earth.

All of the fish shown in the photographs are commercially fished, although some species shown are regarded by scientists as being over-fished and threatened. Fishlove believes that the use of these fish in these photographs is justified so as to highlight what species could be lost if overfishing continues.

None of the fish depicted in the photographs have been specifically caught for the purposes of making these photographs, and would have been landed irrespective of whether these photographs were taken or not. Other than in very unusual circumstances, the fish photographed are eaten afterwards. The fish in this image was sourced from Santa Monica Seafood.

Fishlove is produced by MOSHIMO, an independent Japanese restaurant in Brighton co-owned by Nicholas Röhl and Karl Jones. Famous for its Fishlove campaign, the restaurant has also won a prestigious PETA award for its promotion of plant-based eating.