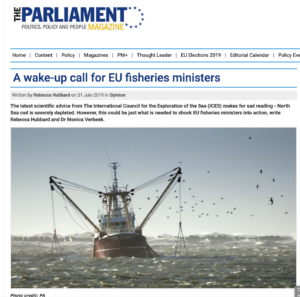 The latest scientific advice from The International Council for the Exploration of the Sea (ICES) makes for sad reading – North Sea cod is severely depleted. However, this could be just what is needed to shock EU fisheries ministers into action, write Rebecca Hubbard and Dr Monica Verbeek.

Half a century of overfishing, including a devastating crash of the North Sea cod fishery in the nineties, should have been warning enough that we cannot negotiate nature’s limits.

Unfortunately not. Now ICES is advising that North Sea cod populations are at such depleted levels, that there should be a 70 percent cut to fishing limits in 2020, compared to 2019.

The need to drastically reduce fishing of North Sea Cod will be a disaster for many fishers. In many ways it is also a political disaster for fisheries ministers.

Why? Because the need for such a low catch limit could have been prevented if decision makers had listened to what scientists have been telling them for years.

Continue reading on The Parliament