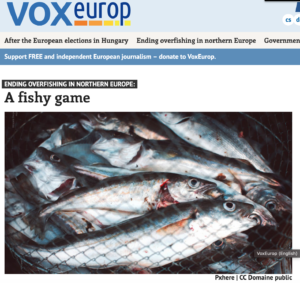 The North Sea is no exception to the overfishing spree across Europe. As discussions are ongoing between Norway and the EU, scientists issue their latest warning on collapsing cod stocks.

The conflict between the urge to relentlessly plunder the sea for instant profits and the need to conserve fish as a healthy food source and a diverse ecosystem for future generations is coming to a head off the coast of northern Europe. Scientists have just launched their latest warning: cod, a favorite species in high demand by seafood lovers, should spend much more time at sea than it spends in restaurants to avoid collapsing.

Now it’s up to the EU and its main fishing partner, Norway, to seize their last chance to comply with their commitment to end overfishing by 2020. This target, set by the EU in its Common Fishery Policy, and agreed to by Norway and the EU globally through the International Convention on Biological Diversity, is far from being met.

“In 2019 the EU and Norway agreed to a cut of around 30 percent to the TAC, while the science recommended that it should have been around a 50 percent cut,” said Rebecca Hubbard, Programme Director at Our Fish, which campaigns for an end to overfishing in European waters. “So, the new advice implies a worsening of an already bad situation that governments chose to ignore last year, and the gamble has not paid off.”