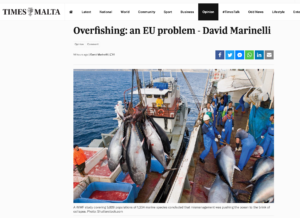 This would lead one to think that the crisis is under control and the EU has it all in hand. Not so. Although the need to transform how we use and produce food has been clear for decades, political decisions have been made that have ignored this reality. We have been farming, fishing and consuming as though there were infinite fish populations. This is obviously not the case.

“They’re just not getting it,” said Rebecca Hubbard, programme director at Our Fish.

“Demonstrating a shocking ignorance of the global biodiversity and climate crisis, the EU Council of Fisheries Ministers refused to follow scientific advice. Ending over­fishing would be a rapid, achievable act that would bolster the health of the ocean in the face of the climate crisis, securing futures for coastal communities, as well as being a firm response to calls from EU citizens for climate action.”