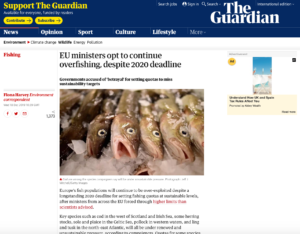 Europe’s fish populations will continue to be over-exploited despite a longstanding 2020 deadline for setting fishing quotas at sustainable levels, after ministers from across the EU forced through higher limits than scientists advised.

Key species such as cod in the west of Scotland and Irish Sea, some herring stocks, sole and plaice in the Celtic Sea, pollock in western waters, and ling and tusk in the north-east Atlantic, will all be under renewed and unsustainable pressure, according to campaigners. Quotas for some species were increased from last year, despite advice that they should be brought down.

“They’re just not getting it,” said Rebecca Hubbard, programme director at Our Fish. “Demonstrating a shocking ignorance of the global biodiversity and climate crisis, the EU council of fisheries ministers refused to follow scientific advice. Ending overfishing would be a rapid, achievable act that would bolster the health of the ocean in the face of the climate crisis, securing futures for coastal communities, as well as being a firm response to calls from EU citizens for climate action.”