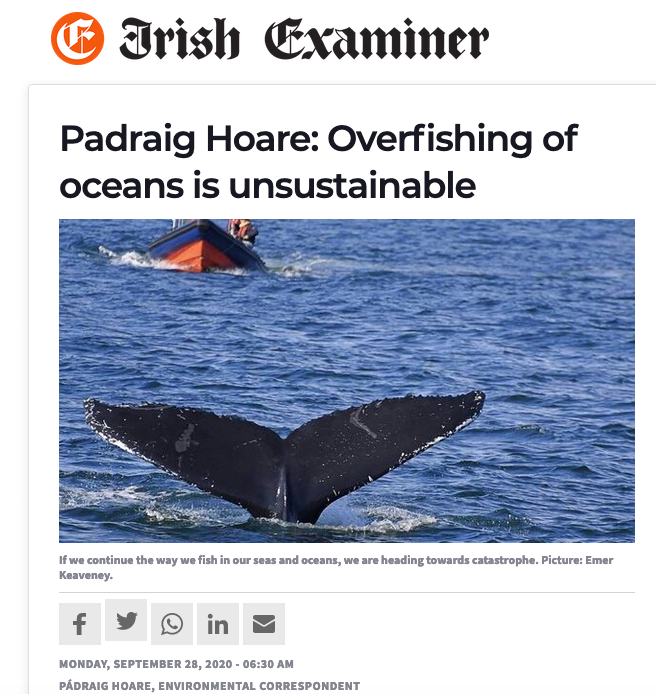 The oceans are vast, and the bounty is plentiful — at least, that is the perception of fishing among us laypeople.

However, according to the scientists, among them 50 of Ireland’s top researchers and academics, that perception could not be more wrong.

If we continue the way we fish in our seas and oceans, we are heading towards catastrophe.

Experts say that gloomy scenario is not hyperbole, but also that it is reversible if the practice of overfishing is tackled.

Overfishing is a clear and present danger to biodiversity, climate and human health, according to more than 300 scientists in the EU, including around 50 Irish experts.

They have sent a joint statement to the EU Commissioner for the Environment, Oceans and Fisheries, Virginijus Sinkevičius, calling for action.

End overfishing “as an urgent and necessary response to the biodiversity and climate crises” is the crux of their pleas to the European Commission, European Parliament and EU member states.

…
The statement, which including signatories from UCC, UCD, NUI Galway, TCD, Galway-Mayo IT and Queen’s University Belfast among other leading European institutions, calls for recognition “that ecosystem-based fisheries management is critical to the health of the ocean and its capacity to respond to climate change and that fishing limits must be set accordingly”.

“The combined effects of climate change and overfishing are accelerating the decline of ocean health. Ending overfishing would reduce the cumulative pressures on the ocean, increase its resilience and contribute to mitigating the effects of climate change. It would be decisive and important climate action and it can be taken today,” the scientists say in their statement.

Programme director of campaigning initiative Our Fish, Rebecca Hubbard, said the evidence is incontrovertible and the conclusions unavoidable unless change and sustainability is forthcoming.

“The science is clear – now the EU must ensure that a healthy ocean is central to its response to the nature and climate crisis – and that means finally putting an end to overfishing.

“Just like with our own health, if we continue to batter the ocean with overfishing, the whole system will weaken further, until it can no longer provide us with the life-support we need it for – oxygen, climate regulation, food and jobs. The EU must stop dragging its feet and take this clear and decisive action now, before it’s too late.”