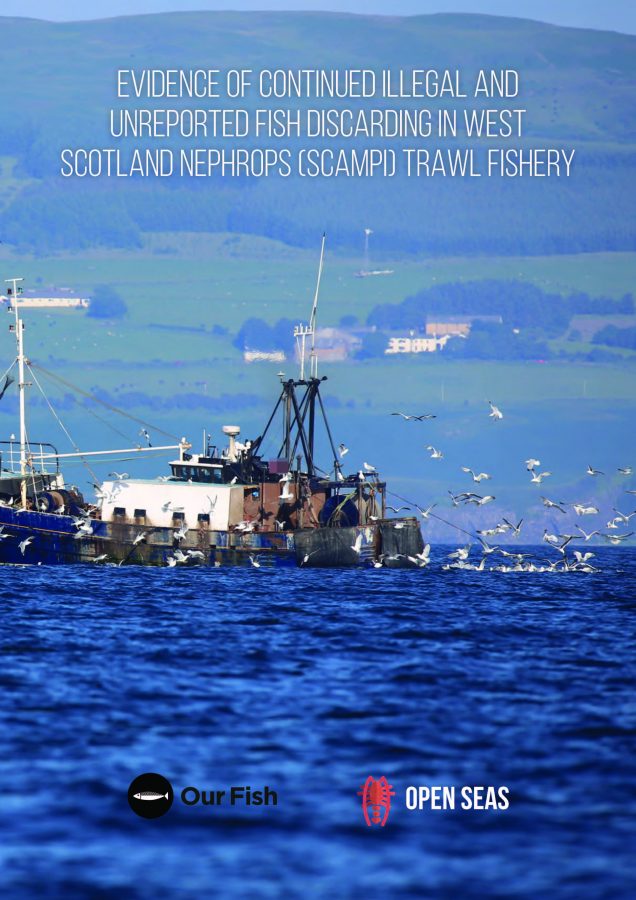 Edinburgh, 29 November 2019:- Seafood campaign groups Our Fish and Open Seas have called for urgent measures to stop illegal discarding of juvenile and vulnerable fish species to allow dwindling fish stocks to recover. In a report published today analysing landing data, video and photographic evidence, the authors present clear evidence of ongoing discarding of fish by trawlers in Scottish waters supplying the scampi industry, despite this now being illegal. The campaigners have also expressed concerns about the possible misuse of bycatch ‘buffer’ quota designed to help ensure these inshore trawlers fish legally.

The report Evidence of Continued Illegal and Unreported Fish Discarding in West Scotland Nephrops (Scampi) Trawl Fishery published today by Open Seas and Our Fish reveals images and video footage taken this summer from around the west coast of Scotland showing small, dead fish being routinely thrown back into the sea from prawn trawl boats, against both Scottish and EU fishing rules.

The evidence is corroborated by figures which indicate that thousands of tonnes of fish such as cod, whiting and haddock are now being discarded illegally in the fishery, overfishing these vulnerable stocks. All bycatch caught in this fishery must be landed, but in ports where hundreds of tonnes of prawns destined for the scampi market were landed, absolutely no bycatch species such as cod, whiting and haddock were declared. Cod and whiting continue to be landed to ports such as Kinlochbervie, suggesting the bycatch ‘buffer’ quota is not being used widely by the prawn fleet, whilst catches of undersized fish from already decimated inshore stocks continue being discarded at sea.

The campaigners are calling for an urgent spatial plan to avoid inshore nursery and spawning grounds, vessel tracking on all boats as well as strict license conditions to be set so that bycatch quota is only available to those following the rules and who are facing a bycatch problem. The evidence adds weight to growing calls for quota to be set in line with scientific advice and for tighter enforcement to ensure sustainability measures have the intended effect.

Bec Hubbard, Program Director for Our Fish said: “There is mounting and clear evidence that the Landing Obligation is being ignored to the serious detriment of once healthy fish stocks. West coast cod has collapsed and yet despite gear innovations and the allocation of bycatch quota against recommended levels, trawl fisheries continue to illegally discard undersized fish, the future of stock recovery. Fish populations like cod and haddock on the west coast are in crisis – when are governments around Europe going to recognise the urgency for action?”

Phil Taylor, Head of Policy at Open Seas said: “Sadly, the amount of bycatch and the fact it is being illegally discarded means this is not a sustainable fishery. We respect the efforts made by some within the industry, but bringing scampi onto our plates still involves the catch of large volumes of small, baby fish like cod, from stocks that have already collapsed. Regulators and those profiting from selling scampi must take urgent measures to rebuild fish stocks, and protect the wider marine ecosystem. Our stocks won’t recover unless the discard ban is implemented and enforced across the whole fleet, so that real data can inform an urgent plan to avoid trawling in sensitive coastal waters.”