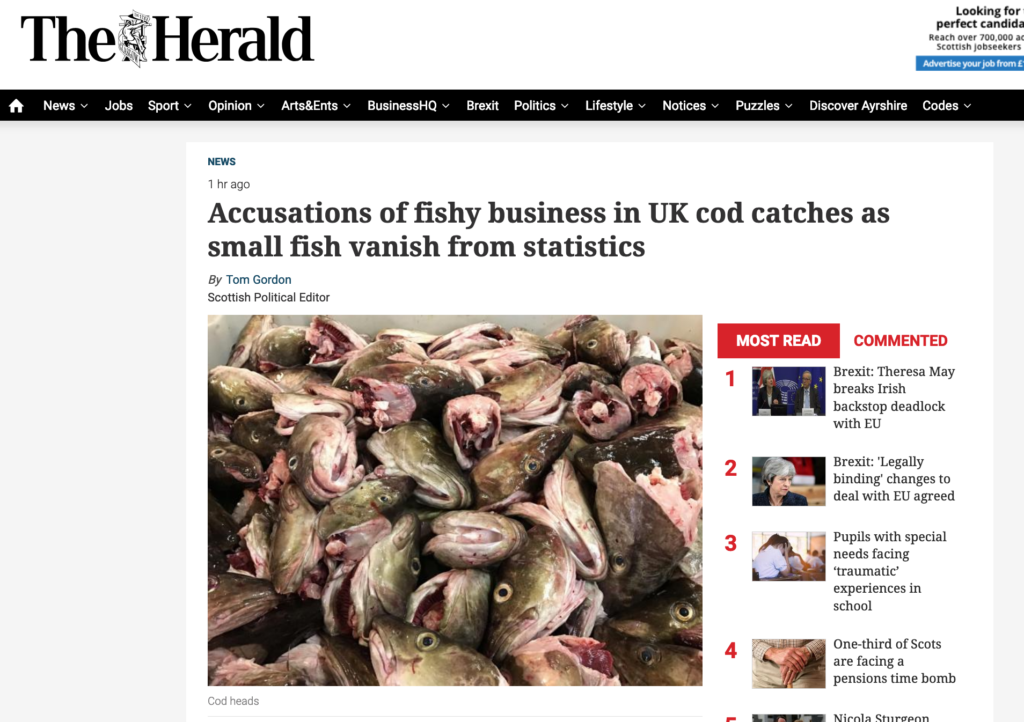 GOVERNMENT agencies have been accused of turning a blind eye to “rampant” rule breaking in the fishing industry, after no undersized cod were reported landed last year.

The campaign group Our Fish said it was unbelievable that, according to official data, zero tonnes of unwanted fish were landed by the UK fleet between January and mid-November.

They suggested around 7500 tonnes of undersized (below 35cm) cod had in fact been illegally discarded, and an allowance for such fish abused to land more lucrative adult cod instead.

Our Fish, which obtained data from the Marine Maritime Organisation using freedom of information, is now urging Brussels to cut the UK cod quota by 7500 tonnes in 2019.

The Scottish fishing fleets gets 70% of the UK’s North Sea’s cod quota.

Since January 2018, all UK fishers have been obliged to count and land undersized cod – which is used for fishmeal, pet food and chemicals – with vessels given a 5,200 tonne “top-up” over and above the main 16,800 tonne quota to help cope with the burden.

However, no undersized fish were reported and instead the UK officially landed 21,596 tonnes of adult cod only, suggesting 7500 tonnes of small fish were dumped at sea.

Rebecca Hubbard, Program Director for Our Fish, said: “This unreported catch would represent an enormous waste of valuable fish, and significantly worsen overfishing. This is extremely concerning.

“In recent years north sea cod was thought to be recovering, however the outlook is again looking very poor with scientists recommending a huge cut for 2019 fishing limits.”

She added: “The UK government appears to be aware that large-scale unreported, illegal fishing for an important stock like cod is taking place within its fishing fleet, yet the Marine Management Organisation and Marine Scotland seem to be turning a blind eye. It is incomprehensible and indefensible that such rampant non-compliance would be simply ignored.”