Home > press > Food Ingredients 1st: Fears grow that overfishing will result in stocks having “no chance to recover” as Europe sets limits for 2021 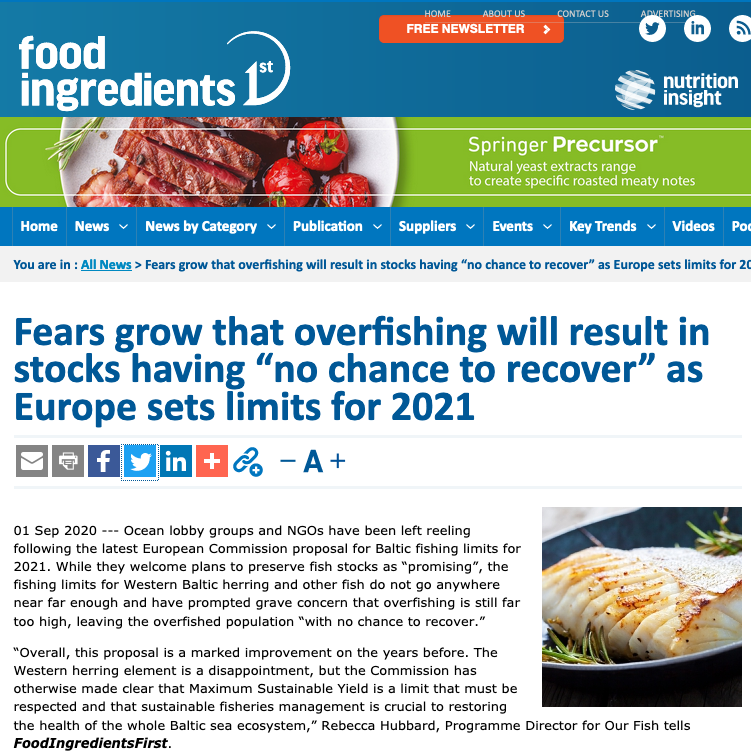 Food Ingredients 1st, 1 September 2020: Fears grow that overfishing will result in stocks having “no chance to recover” as Europe sets limits for 2021

Ocean lobby groups and NGOs have been left reeling following the latest European Commission proposal for Baltic fishing limits for 2021. While they welcome plans to preserve fish stocks as “promising”, the fishing limits for Western Baltic herring and other fish do not go anywhere near far enough and have prompted grave concern that overfishing is still far too high, leaving the overfished population “with no chance to recover.”

“Overall, this proposal is a marked improvement on the years before. The Western herring element is a disappointment, but the Commission has otherwise made clear that Maximum Sustainable Yield is a limit that must be respected and that sustainable fisheries management is crucial to restoring the health of the whole Baltic sea ecosystem,” Rebecca Hubbard, Programme Director for Our Fish tells FoodIngredientsFirst.

“Unfortunately, the health of the Baltic, and all of the fishing industries depending on it, are still suffering as a result of decades of mismanagement. It’s recovery will take time, but we hope this proposal and the Council’s decisions are the turning point for committing to this recovery,” Hubbard highlights.

“Unfortunately, the Western Baltic herring population has slumped so low that the vast majority of herring being consumed is from the North East Atlantic now. The largest share of quotas go to Germany – and there the majority goes to the richest industrial fishing company – so there isn’t even a short-term benefit for small-scale fishers and regional communities,” says Hubbard.

“Both Germany and Denmark used ‘socio-economic’ reasons to justify increased quota last year, however the Danish processing factory has since closed and the German factory apparently processes herring from UK waters exclusively. It is therefore illogical and irresponsible to propose overfishing Western Baltic herring. It is an unfortunate disappointment in an otherwise thoughtful proposal from the Commission,” she adds.

“AGRIFISH ministers are infamous for ignoring science and putting short-term profits for a few big players in the industry first. We hope that this year, Baltic leaders instruct their fisheries ministers to put a stop to this. We are at a tipping point and we have acknowledged this by signing up to the Green Deal. In order to deliver on this commitment for a liveable planet, to protect biodiversity and mitigate climate change, we must end overfishing,” Hubbard concludes.