Madrid Bergen, 3 December 2019:- Delegates arriving for this morning’s session of COP25 the EU-Norway Fisheries consultation were met by a troupe of flamboyant flamenco dancers to highlight the link between the UN climate change negotiations in Madrid and the need for the EU and Norway to deliver on their ambitions for climate action by ending overfishing of shared fish populations, which would increase the ocean’s capacity to mitigate climate change.

“Ending overfishing would not only secure vital fish populations and the communities that directly depend on them for the future, it will eliminate one of the greatest pressures undermining ocean health, which is vital in the fight against climate breakdown. Norway and the EU have an opportunity to deliver on their stated ambitions to respond to the climate emergency, by taking decisive action to end overfishing,” said Rebecca Hubbard, Our Fish Programme Director. 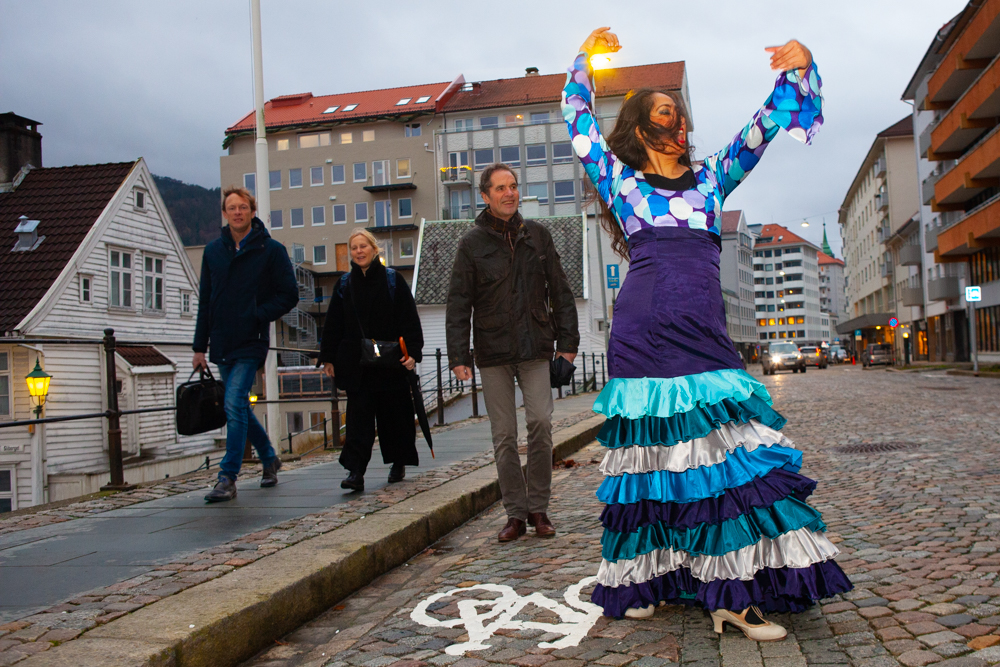 The Our Fish campaign brings Flamenco to the streets of Bergen to remind EU and Norway fisheries officials meeting to discuss shared fish stocks that as COP25 tkes place in Madrid, ending overfishing is effective action against climate change.

Officials from EU member states and Norway meet annually at Norway’s Fiskeridirektoratet, (Fisheries Directorate), to decide how on how to fish what are known as shared stocks. EU-Norway consultations consistently result in agreements to continue overfishing – probably due to their flawed approach of assuming the scientific advice for maximum sustainable catches as a starting point, and then negotiating upwards, with fishing industry members participating in their delegations – while NGOs are refused access [1]. The annual Bergen meetings are regarded as more secretive than EU AGRIFISH council meetings, which were recently investigated by the EU Ombudsman and found to be lacking in transparency [2].

While the EU committed to phase out overfishing under the reformed Common Fisheries Policy (CFP) by 2015 or, at the absolute latest, by 2020, it is during consultations such as this meeting in Bergen, and during the annual AGRIFISH meetings where governments typically agree to continue overfishing. The decisions made in Bergen for shared stocks will be confirmed by the AGRIFISH council in Brussels on 16-17 December, as well as all other North East Atlantic  TACs (Total Allowable Catches) for EU waters. This year, quotas for North East Atlantic fish populations look set to be overfished again [3].

Fisheries ministers have set fishing quotas above scientific advice in six out of every 10 cases since the CFP was reformed in 2013 [4]. The AGRIFISH Council very rarely sets fishing quotas at more sustainable levels than the EU Commission proposes. The EU Commission’s proposal for a number of North East Atlantic fish populations for 2020 are already above the scientific advice for Maximum Sustainable Yield, and the political delay from fisheries ministers until 2019 has worsened the situation, meaning ministers are now faced with proposals for drastic cuts to some fish such as the iconic North Sea cod [5].

“Norway recently played host to the Our Ocean conference; COP25 is happening right now in Madrid. Both Norway and the EU have made a lot of noise about their commitment to protecting the ocean and addressing the climate emergency and now they need to make good on their promises. Fisheries managers from Norway and the EU need to pull their heads out of the fishing ghetto, acknowledge their part in the bigger picture of a planet in crisis, and start delivering; ending overfishing by 2020 and climate action can and should, start here and now in Bergen,” concluded Ms Hubbard.

Missing the deadline of 2020 puts the EU in difficult territory. It places EU fisheries ministers in direct contravention of the laws that they, or their predecessors, created and signed up to, and in potential conflict with the climate action taken by other ministries within their own governments

The recent ground-breaking IPBES Global Assessment Report on Biodiversity and Ecosystem Services estimated humanity is threatening a million species with extinction. It also concluded that the biggest threats to nature are from changes to land/sea use and over-exploitation. Overfishing remains the biggest impact on our ocean.

Council of the European Union Conclusions on Oceans and Seas

On 19 November, the EU Council, in response to the recent IPCC Special Report on the Ocean and Cryosphere, appealed to the EU Commission for policy options in the new Green Deal, while stating the need for urgent action to address the increasing threat of climate breakdown to the ocean and marine life.

Our Fish Response to EU Council Conclusions on Oceans and Seas

Norway has invested a great deal in projecting itself as a climate and anti-overfishing champion, when in actual fact, it too, is hypocritical on both issues. On climate, Norway has made big commitments to become a ‘low-carbon society’ but in reality, emissions are decreasing much slower . On overfishing, Norway signed up to and is a strong advocate for the Sustainable Development Goals , which include anto end to overfishing by 2020, but on the water, they received a quota in 2019 large enough to plunder a massive 164,000 tonnes of fish above scientifically advised sustainable levels (equivalent to 21% of its shared stock quota with the EU).