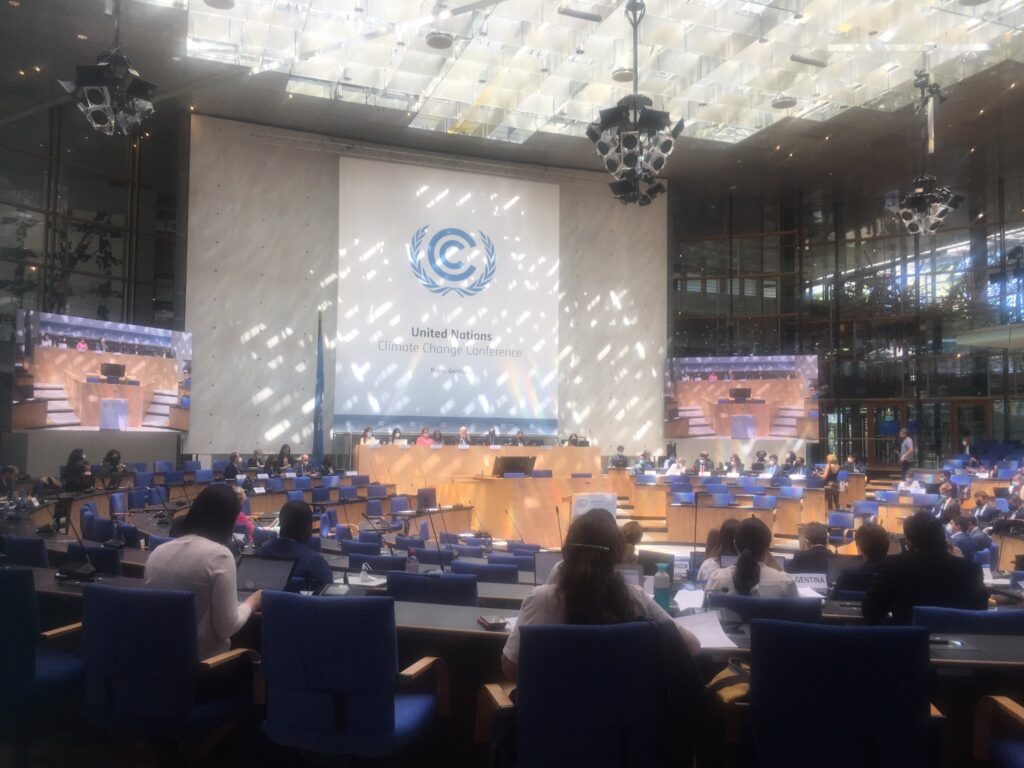 Bonn, Germany, Wednesday 15th June 2022: NGOs attending the UN Climate Conference in Bonn welcomed today’s first annual UN Ocean and Climate Change Dialogue – aimed at strengthening ocean-based action on climate change – but called for development of specific goals and a pathway for increasing ocean climate action that can be agreed at the Conference of the Parties to the UNFCCC in Egypt later this year (UNFCCC, COP27).

The mandate to hold the Ocean and Climate Change Dialogue was provided by COP 26 Glasgow in December 2021. Today’s four-hour Dialogue included two rounds of panels including presentations from the UN Food and Agriculture Organisation, Fiji, USA, and Belize, followed by interventions from Parties like the EU, Norway and Chile, on ‘strengthening and integrating national ocean climate action under the Paris Agreement’ and ‘enabling ocean climate solutions and optimising institutional connections’.

There was active participation in the Dialogue, with input from many countries on their commitments to decarbonise shipping and fishing, enhance protection of coastal and marine ecosystems, acknowledge the importance of sustainable fisheries, and to increase finance and support for developing a roadmap for further ocean climate action.

“Despite taking the significant and welcome step of organising this annual ocean climate dialogue, the UNFCCC must urgently navigate the long route from acknowledging the ocean’s role in climate action to mapping how we can fully harness the power of the ocean in the fight against climate change,” said Rebecca Hubbard, Programme Director of Our Fish. “It was encouraging to hear that the UN’s Food and Agriculture Organization (FAO) has specifically noted the importance of sustainable fisheries management as a nature based solution, and that the EU is pursuing decarbonisation of its fishing fleet. We expect to see ecosystem-based fisheries management and a transition to low-impact low-carbon fishing play an increasingly important role in both the UNFCCC process, other UN fora, and in the EU’s climate action plans,” she concluded.

“It is clear that UNFCCC has heard the call from the ocean and the suggestion that there will be an ocean session at plenary at COP27 in Egypt is strongly supported”, said Ed Goodall from Whale and Dolphin Conservation. “We are hearing more positive words around blue carbon and NDCs but action must be fast, and we must ensure that the ocean life, like whales and fish, that drives carbon and nutrient cycling is considered and given a similar mandate of protection and restoration”.

“We need to integrate and strengthen ocean-based action in other existing UNFCCC processes and workstreams, which includes encouraging and supporting countries to integrate ocean actions in their Nationally Determined Contributions, National Action Plans and the Global Stocktake. The Ocean and Climate Change Dialogue should reinforce mainstreaming of ocean-based climate solutions and ensure proper addressing of drivers to ocean and climate change, and thereby avoid a siloed approach to oceans under the UNFCCC,” Julika Tribukait from WWF Germany said.

The ocean has absorbed over 90% of the excess heat generated by humans since the industrial revolution, without which, it is estimated the Earth would be 35 degrees hotter. But these climate services are not merely chemical and physical reactions – they rely on a functioning ocean-carbon pump, which relies on an ocean full of marine life, fish and healthy habitats.

Coastal and marine blue carbon ecosystems not only provide climate mitigation benefits, but are key to adaptation by acting as buffers against the impacts of extreme weather events and sea-level rise. Similarly, managing healthy populations of fish and more complete marine food webs not only increases resilience of the ocean in the face of climate change, it also reduces the amount of CO2 in the atmosphere by increasing sequestration and reducing emissions from the fishing fleet.

Keeping the ocean’s ecosystems functions intact to maintain its power to mitigate and adapt to climate change protects the livelihoods of millions of people around the globe living in coastal communities, especially those in coastal LDCs and SIDS.

CAN International submission to the Ocean & Climate Dialogues: https://climatenetwork.org/resource/can-submission-possible-topics-for-the-ocean-and-climate-change-dialogue-to-take-place-in-conjunction-with-sbsta-56/

Our Fish submission to the Ocean & Climate Dialogues