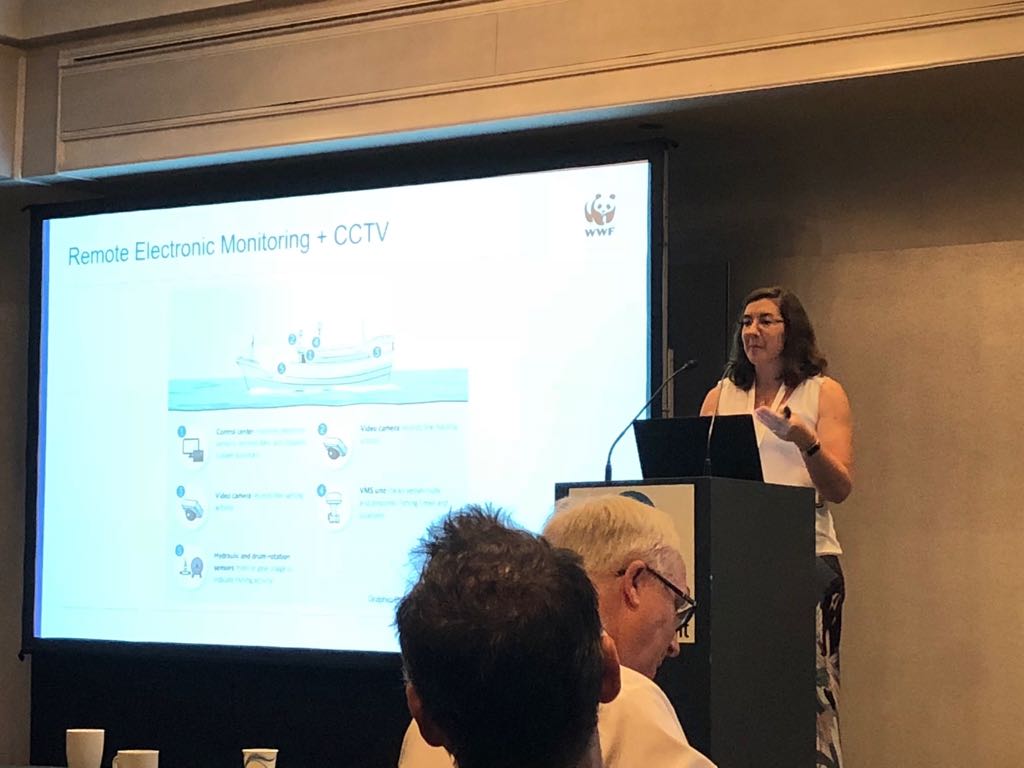 A video message from Hugh Fearnley Whittingstall flashed up on the screen –  with Hugh describing how shocked he was to learn, in 2010, that more than half the fish being caught in the North Sea were being discarded. The growth of the Fish Fight campaign helped to mobilise vast public support to end this waste, and the resulting Landing Obligation that was introduced in the reformed Common Fisheries Policy of 2013. Today, five years down the track, there are reports of widespread illegal, unreported discards, as EU member state governments back away from their legal obligations.

The global Seaweb Seafood Summit panel, which took place this morning in Barcelona, brought together four different perspectives on this issue in an event The Fish Fight campaign and Common Fisheries Policy aimed to eliminate discarding in Europe – five years on, are we succeeding? – Miguel Nuevo from the European Fisheries Control Agency (EFCA), Ally Dingwall of UK retailer Sainsbury’s, Danish fisherman Verner Jensen, and WWF EU marine leader Samantha Burgess. While there were some different views on how to get there – it was clear that collaboration between civil society, the fish catching and retail sector, and government agencies, was necessary to achieve an end to (now) illegal and wasteful discarding, and to ensure fully legal and sustainable fisheries in EU seas.

Miguel Nuevo reported on the extensive program that EFCA  conducts across numerous seas, regional groups, and EU countries, to assist with monitoring and control of the landing obligation. While there were two infringements issued to Danish vessels in 2017 for illegal discarding, and numerous fishing fleets receive high and very high risk ratings for non-compliance from EFCA, Miguel believes there has been an improvement in selectivity and reporting of discards.

Ally Dingwall of the UK retail sector Sainsbury’s recalled that discards had been an issue for EU fisheries for over ten years, far before the Fish Fight even began. For retailers, there is a fundamental requirement to demonstrate legal and responsible sourcing. There has been no change in public opinion in the UK with respect to discarding, regardless of Brexit, and there is an expectation that all retailers will ensure their suppliers are compliant. The risk to the supply chain, of illegal unreported discards, has driven UK retailers to engage in dialogue with the industry and government to take action to address the issue. They are supporting innovation projects to develop solutions for improved selectivity; and have signed up to a joint retailer statement with the UK Seafood Industry Alliance and others to support remote electronic monitoring and other initiatives to ensure successful implementation of the landing obligation.

Danish fisherman Verner Jensen shared his view on how fishermen want to minimise discards  – many are trying new gears and innovating, so that they can avoid landing fish, which either give them low profit returns or cost them money to dispose of. Verner was one of the innovators in Denmark that introduced CCTV cameras as part of a remote electronic monitoring pilot project in 2008, and significantly decreased his discards to just two  percent of catch. Verner believes that remote electronic monitoring (using CCTV cameras) can show consumers that they are fishing sustainably, complying with the rules, and lead the way forward to a better fishing future.

Samantha Burgess of WWF in Europe reported that we are still failing to implement the landing obligation, and despite having some strong players in the industry and retail sector, there was still a lot of  resistance to change from the industry, and unwillingness to collaborate with others to eliminate discards. Samantha made clear that without proper transparency, and documentation of all catches, including discards, we will not have sustainable fisheries management. Remote electronic monitoring (REM), with CCTV and net sensors on board vessels, provides a holistic system to enable transparency. It can be implemented according to a risk-based approach, is cost-effective, provides more data for fish stock management, and can support fishermen demonstrating best practice. On the other hand, the cost of not implementing REM is that we will never have a level-playing field, sustainable management, or full transparency – and without transparency there is no market.

Audience members questioned what the inhibitors to adopting REM were in the EU – to which a number of panel members agreed that lack of political will was a key block, with inconsistent support from fisheries ministers at a member state level. Many panel members also agreed that fishermen are very innovative towards improving selectivity, but a lack of political will had also prevented scaling-up and mainstreaming of some successful selectivity projects.

Ally Dingwall of Sainsbury’s: If you can’t eat it, don’t catch it. We need stronger, wilder innovation to achieve this.