Home > news > João Aguiar Machado: If You Plan to Turn the Tide, Be Fearless About It 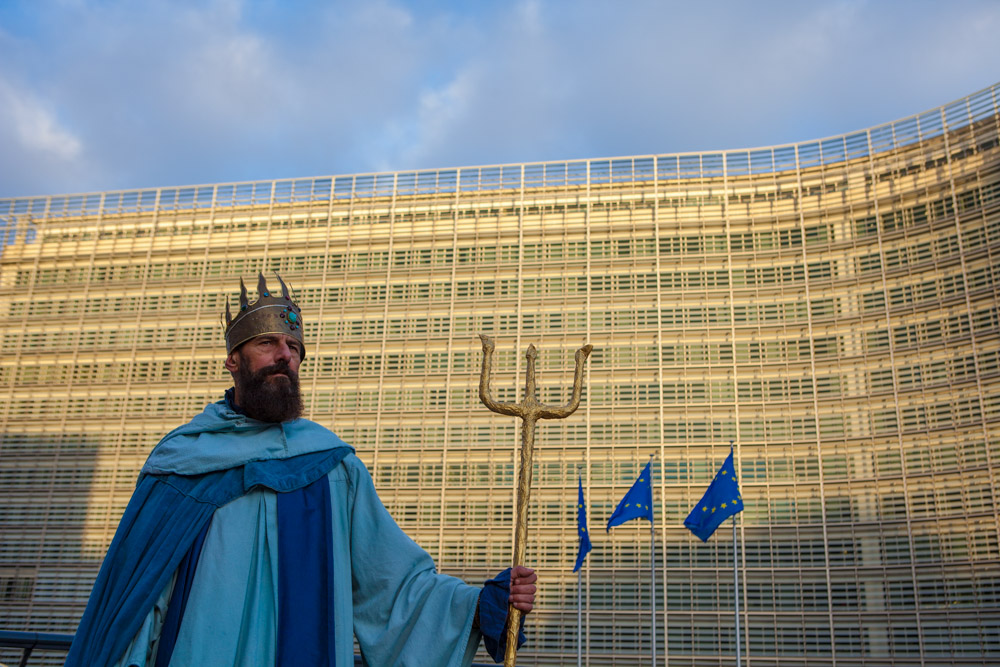 Poseidon, God of the Sea, keeps vigil outside the European Commission in Brussels

“Political writing in our time consists almost entirely of prefabricated phrases bolted together like the pieces of a child’s Meccano set… to write in plain, vigorous language one has to think fearlessly, and if one thinks fearlessly one cannot be politically orthodox”, wrote George Orwell, 72 years ago.

Not much has changed, it seems. In Turning the Tide, published on The Parliament’s website on April 23, João Aguiar Machado, the EU Commission Director-General of Maritime Affairs and Fisheries signed what appeared to be a hastily assembled list of things to be greenwashed, cobbled into a self-congratulatory work of fiction.

We do not live in orthodox times – we must employ fearlessness and honesty, not wishful thinking and greenwashing, if we we are to confront and overcome the issues facing our oceans and climate – such as continual EU overfishing.

Mr Machado writes that the “EU is quickly becoming a world leader in protecting” the oceans. Our Fish would counter that the EU must first show leadership by delivering protection in EU waters before crusading abroad. Reforming the common fisheries policy in 2013, in a bid to save both plummeting fish populations and ailing fishing industries, was an important first step. But six years later, EU countries are still failing to implement those laws – and they are trying to retell the story in a way that makes them look good.

Mr Machado wrote: “In 2009, the EU fishing fleet was barely profitable. This year, almost 99 percent of the stocks in the North East Atlantic and Baltic Sea, managed by the EU alone, will be fished sustainably.”

Indeed, the EU Common Fisheries Policy commits to sustainable fishing of all fish stocks by 2015, or by 2020 at the latest (in line with Maximum Sustainable Yield). But here’s how far from the real story that Mr Machado is drifting with his bullet points of progress:

The initial impression is that by focusing on this “99 percent” message, Mr Machado’s article appears to present the EU as mostly “getting it right” with sustainable fisheries management. However, on closer examination, it seems that he, the EU Commission and Member States are trying to rewrite the story on overfishing. They are attempting to shift the baseline to create an acceptable level of overfishing – even when this exacerbates the climate and biodiversity crises that our children are rampaging against.

“One of our main achievements in fisheries management is the so-called landing obligation” writes Commissioner Machado. “Every year, worldwide, 30 million tons of fish are thrown back into the sea – most don’t survive. The landing obligation puts a stop to this wasteful practice.”

The landing obligation aimed to end the ridiculous waste of around 1.7 million tonnes of fish by EU fishing fleets each year. But Mr Machado is well aware that the landing obligation has not stopped it, because it is neither being complied with – which is why the Commission introduced a proposal for remote electronic monitoring into the review of the Control Regulation in 2018 – nor is it being implemented in full.

“From January 2019, EU vessels must bring all catches ashore, without exemption”, says the article.

This is not correct; the discard plans approved by the European Commission include several exemptions in all sea basins – in some cases, despite warnings from scientists that there was insufficient evidence to justify it. DG Mare even has an exemptions webpage where anyone can read about it – including the Director General.

“In the face of climate change, our oceans offer us remarkable means to mitigate this planetary challenge”.

If Mr Machado and the EU Commission truly believe this, what are they waiting for? A recent IPCC report proposed that we have just 12 years to counter the worst effects of the climate crisis. How many of these years will the EU Commission devote to signing off puff-pieces that attempt to assure us that all is well – and that the crisis is being dealt with?

The IPBES report released this month states that we are threatening 1,000,000 species with extinction – along with the very life-support system we all depend on. One of the key drivers, even more than climate change, is exploitation of organisms (eg. fishing). We are careening towards the cliff edge. Only immediate transformative change will save us, which means facing up to the truth and standing up to those with vested interests who benefit – at least in the shorter term – from ignoring reality.

If the EU is serious about being a global leader, the new team of Commissioners will need to stop trying to rewrite the truth, and instead focus on changing the future to the one we need. Our children are outraged, our scientists are calling for a revolution. It’s time to deliver on your commitments to us, and to our oceans.

Ending overfishing is one of the quickest, most straightforward ways the EU can help stop the haemorrhage of marine biodiversity, restore ocean health and build resilience against the worst effects of climate change. Mr Machado and his colleagues know exactly what needs to be done.

Rebecca Hubbard is the Programme Director of Our Fish, which works to end EU Overfishing.

An abridged version of this article was published in Parliament Magazine, May 20, 2019