The European Commission has been accused of playing down the threat posed to sustainable fishing stocks by continued overfishing in EU waters. 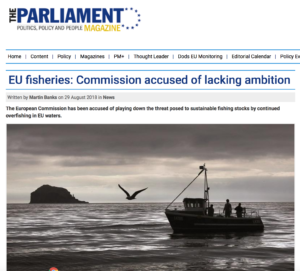 The attack comes as part of a public consultation exercise launched by the Commission on fishing opportunities for 2019, under the common fisheries policy (CFP).

The aim of the exercise is to allow Europeans to express an opinion on the way in which levels of fishing effort and quotas are set according to the new common fisheries policy.

The contributions received, as well as the outcome of a seminar on the state of the stocks and the economics of fishing fleets that will take place in September, will feed into the Commission’s much-awaited proposals on fishing.

One of the groups making a submission is the Brussels-based Our Fish campaign, which aims to combat over fishing in EU waters.

In its submission, it has expressed “disappointment” at the Commission’s “lack of ambition to ensure full and in time implementation” of the CFP.

It urges the Commission to “shift up a gear” in order to avoid an “unacceptable failure” of the CFP and to end overfishing in EU waters.

Our Fish programme director Rebecca Hubbard told this website, “Our Fish is surprised and disappointed to find that the Commission is playing down the continued overfishing in EU waters, while also diluting ambition to rebuild all fish stocks by 2020, as required by EU fisheries law.

“Our Fish urges the Commission to advocate, unequivocally, for the full and timely implementation of the CFP by member state governments”, she said.

“The challenge of ending overfishing and applying the landing obligation by 2020 is only made greater by failure of member states and the Commission to embrace ambitious and early implementation. Our Fish is ready to support and to encourage governments who tackle the challenge without complacency, delay or obfuscation over the coming months.”

Hubbard added, “The Commission reports on progress to meeting the maximum sustainable yield target for stocks subject to consultations with coastal states as ‘being a challenge’.

“This is another example of a challenge that the Commission can, if it wants to, embrace and overcome – by increasing transparency in the Norway negotiations, including civil society participation, and ensuring the EU’s position is restricted by the CFP limit to end overfishing by 2020”, said Hubbard.

“The EU is currently failing to implement the landing obligation, however there are a number of tools available to the Commission and member states to ensure that discarding is eliminated, data collection is improved, and effective control measures are implemented.

“Namely, the burden of proof must be reversed, so that the obligation to demonstrate fishing in compliance with the CFP must rest with those who are awarded access to the resource – obliging authorities to monitor fisheries is perverse and has contributed to engendering a culture of entitlement and non-compliance.

“In 2013, the reformed CFP made the historic commitment to rebuild fish stocks and dependent communities. However, since then, there has been a marked lack of ambition for its implementation amongst EU governments.”

She said, “The benefits are clear, the incentives well known, and while it might be expected that some industry interests and decision-makers would be slow to embrace those benefits after decades of addiction to overfishing, the Commission should be playing the role of ‘rehabilitation doctor in chief’.

“While some progress has been made, the Communication from the Commission reads too much like an apology for anticipated failure. This is not acceptable – there are still 16 months to go”, said Hubbard.

“It is critical that the ambition of the reformed CFP is not lost as a result of the short-term challenges, or complacency, of implementation. We urge the Commission to uphold its crucial role in ensuring the CFP is fully implemented, and overfishing is ended, restoring the health of the ocean”, said Hubbard.