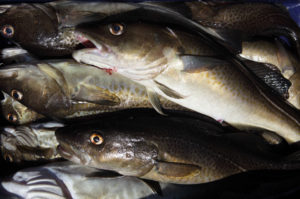 Friday 26 April, Copenhagen: Responding to the April 25th announcement by Danish Minister of Fisheries, Eva Kjer Hansen, that she is willing to cut the 2019 quota for Eastern Baltic cod by 70%, Cathrine Pedersen Schirmer, Our Fish campaign coordinator in Denmark, said:

“That Denmark’s fisheries minister Eva Kjer Hansen will now cooperate with her Baltic counterparts to close Eastern Baltic Cod fisheries is a step in the right direction, but her proposal is far too little, too late (1).”

“The Minister’s proposal to reduce the quota by 70% is less impressive than she would have us believe – an enormous 7,233 tonnes of cod will still be fished, under the questionable auspices of ‘unavoidable bycatch’. This will not save eastern Baltic cod, and only serves to perpetuate overfishing by an industry that is renowned for failing to transition to a sustainable model.”

Yesterday’s announcement from Denmark follows an alarming report published earlier this month by the International Council for the Exploration of the Sea, ICES, and a joint NGO letter to Baltic ministers calling for urgent protection of the cod stock. The ICES report found that the eastern Baltic cod population has reached such a critically low level that it is unable to reproduce itself sufficiently to maintain a future healthy stock [2].

In April, NGOs sent an open letter to Baltic Fisheries Ministers asking them to introduce emergency measures to protect the Eastern Baltic cod, in accordance with the Common Fisheries Policy (CFP) rules. More specifically the letter suggested a full closure of the fishery for this particular cod stock, before the start of the cod spawning season in May, as a response to data from ICES experts clearly showing how Eastern Baltic Cod is now at a critically low level. Scientists and researchers have warned about the risk to the health of the eastern Baltic cod population for years – with specific concerns about the low stock numbers, small size at reproduction, and starvation [2]. Yet, since 2013, fisheries ministers have systematically failed to reduce the fishing quota of this vulnerable stock, and have repeatedly ignored scientific advice and continued overfishing.

In 2018, ICES advised that when the precautionary approach is applied, Eastern Baltic Cod catches for 2019 should be no more than 16,685 tonnes [3]. Yet, EU Commission and EU fisheries ministers ignored the advice and set a total fishing limit of 24,112 tonnes, thus exceeding the scientific advice by 7,427 tonnes (45%). The proposal from Minister Kjer Hansen for a 70% reduction of the total Eastern Baltic Cod quota would mean that 7,233 tonnes of Eastern Baltic Cod is allowed to be caught as bycatch – almost the same as the level of overfishing approved by ministers for 2019.

In addition, ICES estimated that in 2017 the total amount of eastern baltic cod discards were 3,452 tonnes [3]. Eva Kjer Hansen thus proposes to give fishermen a bycatch quota of this vulnerable species, which is more than double what scientists estimate is actually caught as bycatch. Denmark’s proposal neither introduces any incentive for a more selective fishery nor does it reduce the impact of other fisheries on the Eastern Baltic cod stock.

“For years, the annual quota for eastern Baltic cod has been set so high that fishermen can’t even catch their quota because there are so few cod left. Desperate times call for desperate measures: Eva Kjer Hansen must immediately close the fishery for Eastern Baltic Cod before the May spawning season begins, and introduce extra urgent measures to reduce the bycatch of cod to as close to zero as possible. This should include increased monitoring at sea of all vessels, including those that catch cod as ‘bycatch’, to ensure accurate documentation of all catches and limit illegal discarding”, continued Petersen Schirmer.

[1] Stop for torskefiskeri i Østersøen (Stop for cod fishing in the Baltic Sea) – Ministry of Foreign Affairs of Denmark http://um.dk/da/fiskeri/nyheder/NewsDisplayPage/?newsID=F35EA759-BF2B-450B-BC5B-5A3A1DACA7B0

The report, published by International Council for the Exploration of the Sea (ICES), an intergovernmental marine science organization, found that the eastern Baltic cod population has reached such a critically low level that it is unable to reproduce itself sufficiently to maintain a future healthy stock, and suggested that even dropping the Eastern Baltic Cod quota to zero will not be enough to rebuild the population

Joint NGO Reply to the Commission on...